Paignton Zoo is a zoo located in Devon, England. It was opened in 1923. 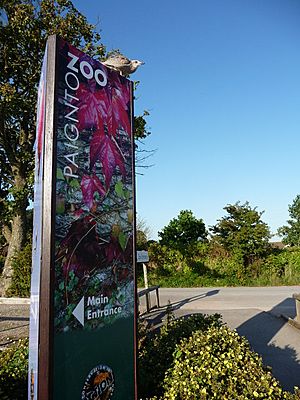 The North of the Zoo consists mainly of a crocodile house, birds, kangaroos, tortoises, camels and zebras.

The South consists of lions, tigers, an off-show kiwi, parrots, and other aviaries.

All content from Kiddle encyclopedia articles (including the article images and facts) can be freely used under Attribution-ShareAlike license, unless stated otherwise. Cite this article:
Paignton Zoo Facts for Kids. Kiddle Encyclopedia.