Newtok (Central Yupik: Niugtaqcode: esu is deprecated ) is a small village on the Ningliq River in the Bethel Census Area, Alaska, United States. At the 2010 census, the population was 354, up from 321 in 2000. Climate change is forcing the primarily Central Yup'ik Alaska Native village to consider relocation. Mertarvik is the destination of those leaving the village.

Newtok first appeared on the 1950 U.S. Census as "Keyaluvik", an unincorporated native village. This was also the name of the earlier settlement just to the west, which became known as "Old Keyaluvik." In 1960, the name was changed to Newtok. Newtok formally incorporated in 1976, but disincorporated in 1997. It was then made a census-designated place (CDP), effective with the 2000 census. 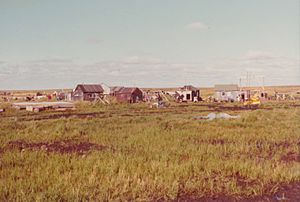 There were 63 households, out of which 68.3% had children under the age of 18 living with them, 63.5% were married couples living together, 11.1% had a female householder with no husband present, and 19.0% were non-families. 19.0% of all households were made up of individuals, and none had someone living alone who was 65 years of age or older. The average household size was 5.10 and the average family size was 5.96.

Land has been acquired for a new townsite called Mertarvik on nearby Nelson Island about 9 miles (14 km) away, and $1 million in government funding has been obtained to build a dock for delivering building supplies.

As of 2016, although the town’s roughly 400 residents voted in 2003 to relocate to higher ground nine miles away, progress has been slow.

On December 24, 2016, the village made a disaster declaration request to the Federal Emergency Management Agency for disaster assistance due to "flooding, persistent erosion, and permafrost degradation starting in January 1, 2006 and continuing." The request would "include relocation of the Yupik Tribe (population of ~350 people)."

Lower Kuskokwim School District operates the Ayaprun School, K-12. As of 2018[update] the school has 128 students, 12 teachers, and 27 other employees. Its continuation is the Mertarvik Pioneer School.

All content from Kiddle encyclopedia articles (including the article images and facts) can be freely used under Attribution-ShareAlike license, unless stated otherwise. Cite this article:
Newtok, Alaska Facts for Kids. Kiddle Encyclopedia.