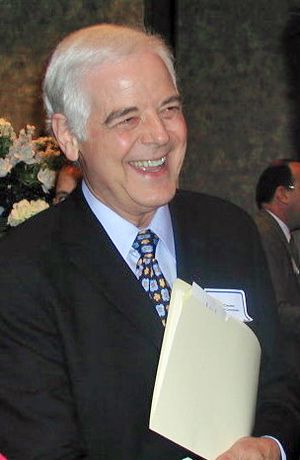 Nicholas Joseph "Nick" Clooney (born January 13, 1934) is an American journalist, anchorman, and television host. He is the brother of Rosemary Clooney and the father of George Clooney. He is also the father of Adelia Clooney.

Clooney was born on January 13, 1934 in Maysville, Kentucky. His parents had German, Irish, and English ancestry. His career would begin in California during the 1960s. Later he moved to Lexington, Kentucky and to Cleveland, Ohio. Clooney was married to Nina Bruce Warren since 1959. They had two children. He now lives in Los Angeles, California.

Clooney ran to be part of the United States House of Representatives for Kentucky for the Democrat Party in 2004. He ran against Ken Lucas. Clooney lost 44% to 54%.

All content from Kiddle encyclopedia articles (including the article images and facts) can be freely used under Attribution-ShareAlike license, unless stated otherwise. Cite this article:
Nick Clooney Facts for Kids. Kiddle Encyclopedia.