Nicotiana tabacum, or cultivated tobacco, is an annually-grown herbaceous plant. It is found in cultivation, where it is the most commonly grown of all plants in the genus Nicotiana, and its leaves are commercially grown in many countries to be processed into tobacco. It grows to heights between 1 and 2 meters (3' to 6'). Research is ongoing into its ancestry among wild Nicotiana species, but it is believed to be a hybrid of Nicotiana sylvestris, Nicotiana tomentosiformis, and possibly Nicotiana otophora.

The plant is native to the Caribbean, where the Arawak/Taino people were the first to use it and cultivate it. In 1560, Jean Nicot de Villemain, then French ambassador to Portugal, brought tobacco seeds and leaves as a "wonder drug" to the French court. In 1586 the botanist Jaques Dalechamps gave the plant the name of Herba nicotiana, which was also adopted by Linné. It was considered a decorative plant at first, then a panacea, before it became a common snuff and tobacco plant. Tobacco arrived in Africa at the beginning of the 17th century. The leaf extract was a popular pest control method up to the beginning of the 20th century.

N. tabacum is a native of tropical and subtropical America but it is now commercially cultivated worldwide. Other varieties are cultivated as ornamental plants or appear as a weed.

N. tabacum is sensitive to temperature, air, ground humidity and the type of land. Temperatures of 20–30 °C (68–86 °F) are best for adequate growth; an atmospheric humidity of 80 to 85% and soil without a high level of nitrogen are also optimal.

The potato tuber moth (Phthorimaea operculella) is an oligophagous insect that prefers to feed on plants of the family Solanaceae such as tobacco plants. Female P. operculella use the leaves to lay their eggs and the hatched larvae will eat away at the mesophyll of the leaf. 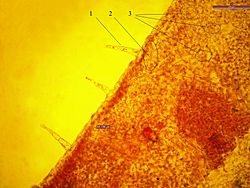 Almost every part of the plant except the seed contains nicotine, but the concentration is related to different factors such as species, type of land, culture and weather conditions. The concentration of nicotine increases with the age of the plant. Tobacco leaves contain 2 to 8% nicotine combined as malate or citrate. The distribution of the nicotine in the mature plant is widely variable: 64% of the total nicotine exists in the leaves, 18% in the stem, 13% in the root, and 5% in the flowers.

Natural tobacco polysaccharides, including cellulose, have been shown to be the primary precursors of acetaldehyde in tobacco smoke. The main polyphenols contained in the tobacco leaf are rutin and chlorogenic acid. Amino acids contained include glutamic acids, asparagine, glutamine, and γ-Aminobutyric acid

Pyridine alkaloids are present in tobacco as free bases and salts. Nicotine accounts for 90-95% of the plant's pyridines with Nornicotine and anatabine accounting for roughly 2.5% each. Pyridyl functional groups present in minute amounts include anabasine, myosmine, cotinine and 2, 3′-bipyridyl.

The tobacco plant readily absorbs heavy metals from the surrounding soil and accumulates them in its leaves. These are readily absorbed into the user's body following smoke inhalation.

The regions that have histories of use of the plant include:

All parts of the plant contain nicotine, which can be extracted and used as an insecticide. The dried leaves can also be used; they remain effective for 6 months after drying. The juice of the leaves can be rubbed on the body as an insect repellent. The leaves can be dried and chewed as an intoxicant. The dried leaves are also used as snuff or are smoked. This is the main species that is used to make cigarettes, cigars, and other products for smokers. A drying oil is obtained from the seed.

After tobacco is harvested, it is cured (dried), and then aged to improve its flavor. There are four common methods of curing tobacco: air curing, fire curing, flue curing, and sun curing. The curing method used depends on the type of tobacco and its intended use. Air-cured tobacco is sheltered from wind and sun in a well-ventilated barn, where it air dries for six to eight weeks. Air-cured tobacco is low in sugar, which gives the tobacco smoke a light, sweet flavour, and high in nicotine. Cigar and burley tobaccos are air cured.

In fire curing, smoke from a low-burning fire on the barn floor permeates the leaves. This gives the leaves a distinctive smoky aroma and flavor. Fire curing takes three to ten weeks and produces a tobacco low in sugar and high in nicotine. Pipe tobacco, chewing tobacco, and snuff are fire cured.

Flue-cured tobacco is kept in an enclosed barn heated by flues (pipes) of hot air, but the tobacco is not directly exposed to smoke. This method produces cigarette tobacco that is high in sugar and has medium to high levels of nicotine. It is the fastest method of curing, requiring about a week. Virginia tobacco that has been flue cured is also called bright tobacco, because flue curing turns its leaves gold, orange, or yellow.

Once the tobacco is cured, workers tie it into small bundles of about 20 leaves, called hands, or use a machine to make large blocks, called bales. The hands or bales are aged for one to three years to improve flavor and reduce bitterness.

All content from Kiddle encyclopedia articles (including the article images and facts) can be freely used under Attribution-ShareAlike license, unless stated otherwise. Cite this article:
Nicotiana tabacum Facts for Kids. Kiddle Encyclopedia.