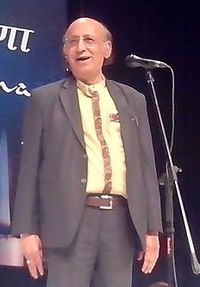 Muqtida Hasan Nida Fazli, known as Nida Fazli (Urdu: ندا فاضلی ‎; 12 October 1938 – 8 February 2016), was an Indian Hindi and Urdu poet. He was born in Gwalior, British Raj. He wrote essays critical of poets of the 1960s in his book Mulaqatein. This book made many poets angry, including Sahir Ludhianvi, Ali Sardar Jafri and Kaifi Azmi. As a result, he was boycotted in some poetic sessions. He recently wrote columns for the BBC Hindi website on various contemporary issues and literature.

All content from Kiddle encyclopedia articles (including the article images and facts) can be freely used under Attribution-ShareAlike license, unless stated otherwise. Cite this article:
Nida Fazli Facts for Kids. Kiddle Encyclopedia.