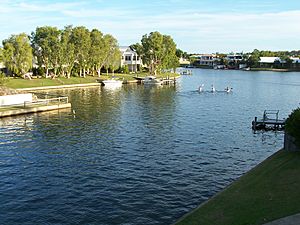 Noosaville is a suburb in Noosa, Queensland, Australia, within the local government area of Shire of Noosa (between 2008 and 2013 it was within Sunshine Coast Region).

Noosaville includes Lake Weyba. "Weyba" is believed to mean "place of stingrays" or "place of flying squirrels". Noosaville also contains a development with canals called Noosa Waters. It is a thriving community which includes many holiday apartments, parklands, nature reserves and shopping facilities such as Noosa Civic, a major shopping centre which serves the Noosa district.

Noosaville has a number of heritage-listed sites, including:

All content from Kiddle encyclopedia articles (including the article images and facts) can be freely used under Attribution-ShareAlike license, unless stated otherwise. Cite this article:
Noosaville, Queensland Facts for Kids. Kiddle Encyclopedia.