The northern hawk-owl (Surnia ulula) is a medium sized true owl of the northern latitudes.

It is non-migratory and usually stays within its breeding range, though it sometimes irrupts southward. It is one of the few owls that is neither nocturnal nor crepuscular, being active only during the day.

The genus name Surnia appears to be a word made up by A. M. C. Duméril, the creator of the genus, and ulula is Latin for a screech owl.

Both male and female have similar wingspans of about 45 cm (18 in). The northern hawk-owl plumage is relatively dark brown with an off-white spotting pattern on all dorsal parts of the body with the exception of the back of the neck which boasts a black v-shaped pattern.

The underbelly is generally white or off-white which continues to the toes with brown bands on the breast and stomach. It also boasts a long tail with brown banding. The northern hawk-owl has a smokey white face with a black border, a flat head, yellow eyes and a yellow curved beak.

The northern hawk-owl has been said to resemble a hawk in appearance and in behavior. 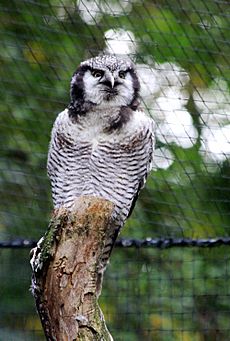 S. ulula has a variety of calls used by the different sexes in different situations. When attracting a mate the male usually lets out a rolled whistle of ulululululululul and a sound similar to tu-wita-wit, tiwita-tu-wita, wita, when perching at a potential nest site. The female’s call is usually less constant and more shrill.

When alerting to danger, the northern hawk-owl lets out a sound similar to rike, rike, rike, rike. It also releases a high pitched scream followed by a yip when an intruder is near to the nest. To warn of impending dangers to a fledgling, the hawk-owl will let out a noise similar to ki ki kikikikiki. Calls can vary in length from 15 s to 2 min.

Three subspecies exist across the northern holarctic. The North American subspecies spans from eastern Alaska through Canada to Newfoundland and in some areas extends south into northern United States. The other two subspecies are found in Eurasia: S. u. tianschanica breeds in central Asia reaching Xinjiang (China) and S. u. ulula resides across Eurasia reaching Siberia at its most eastern range.

Northern hawk-owls are unevenly distributed and highly variable throughout the boreal forest. They live mostly in open coniferous forests, or coniferous forests mixed with deciduous species such as larch, birch, poplar, and willow. They are found in muskegs, clearings, swamp valleys, meadows, or recently burnt areas, and generally avoid dense spruce-fir forests. Winter habitat is usually the same as breeding habitat. 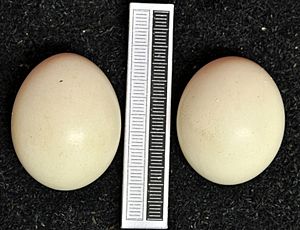 For the most part the female northern hawk-owl does the incubating of the eggs whilst the male forages for food. Once the chicks have hatched their roles shift drastically. At about two weeks into the chicks' lives the female starts to leave the nest for long spans of time (5 hours or more). This span of time is presumably when the female hunts. The male however, will guard the nest diligently until the chicks leave. When predators (usually other raptors) fly nearby, the male will sometimes chase them away from the nest if he feels it is necessary. Once the owlets have grown to a size which allows less parental supervision, they will leave the nest. This occurs on average after their 21st day, and can begin as early as mid-June. After this the female will provide most of the care. However, the male will remain close and will still feed his young on occasion.

The northern hawk-owl has also been known to nest on cliffsides. It has little fear of humans, and will attack if the young are approached too closely.

Other animals that are important prey items for the northern hawk-owl include the red squirrel which has been documented to contribute as much as 20% to the hawk-owl’s biomass. A long list of others include mice, rats, voles, lemmings, the short-tail weasel, partridge, spruce grouse, doves, pileated woodpeckers, sparrows, jays, robins, starlings, buntings, grackles, and finches. In the winter, feeding strategies change; where in summer the main source of food is mammals, in the winter a bigger portion of the hawk-owl’s biomass consists of ground dwelling birds, such as the ptarmigan and the grouse.

The northern hawk-owl is a partially diurnal hunter, although it has been recorded hunting at varying times and does not appear to have a preferred hunting time.

The northern hawk-owl is considered a falconry bird in Ontario, and may be used to hunt small game with a proper license.

All content from Kiddle encyclopedia articles (including the article images and facts) can be freely used under Attribution-ShareAlike license, unless stated otherwise. Cite this article:
Northern Hawk-Owl Facts for Kids. Kiddle Encyclopedia.