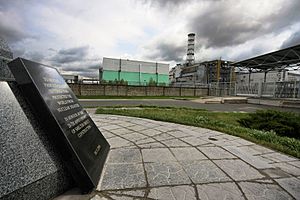 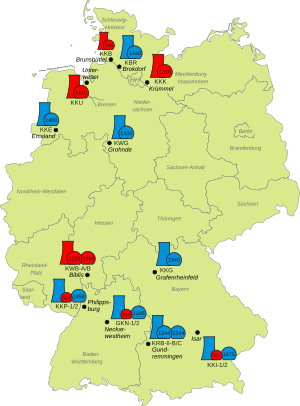 The use of nuclear energy is limited to a relatively small number of countries in the world. As of 2007, only 31 countries, or 16% of the 191 United Nations Member States, operated nuclear power plants. Countries that rely most on nuclear energy were France (with 75% of its electricity generated by nuclear power stations), Lithuania, Belgium, Bulgaria, Slovakia and Sweden, Ukraine and South Korea. The largest producer of nuclear capacity was the USA with 28% of worldwide capacity, followed by France (18%) and Japan (12%). In 2000, there were 438 commercial nuclear generating units throughout the world, with a total capacity of about 351 gigawatts.

Olkiluoto 3 under construction in 2009. It is the first EPR design, but problems with workmanship and supervision have created costly delays which led to an inquiry by the Finnish nuclear regulator STUK. In December 2012, Areva estimated that the full cost of building the reactor will be about €8.5 billion, or almost three times the original delivery price of €3 billion.

Australia produces no nuclear power. Plans to review whether the country should develop nuclear power were abandoned after Kevin Rudd, who opposed the move, was elected prime minister in 2007.

As of 2006, Finland's nuclear power program has four nuclear reactors. The first of these came into operation in 1977. They now provide 27% of Finland's electricity.

The third Olkiluoto reactor will be the new European Pressurized Reactor. Scheduled to go on line in 2011, it will have a power output of 1600 MWe.

Construction of Olkiluoto 3 started in August 2005. Two and a half years later the project is "over two years behind schedule and at least 50% over budget, the loss for the provider being estimated at €1.5 billion".

After the oil crisis of the early 1970s, the French government decided in 1974 to move towards self-sufficiency in electricity production, primarily through the construction of nuclear power stations. France today produces around 78.1% of its electricity through nuclear power. Because France produces an overall electricity surplus, it exports nuclear-produced energy. Some of this goes to countries which are ostensibly against the use of nuclear energy, such as Germany. The Board of Electricité de France (Électricité de France or EDF) has approved construction of a 1630 MWe European Pressurized Reactor or EPR at Flamanville, Normandy. Construction is expected to begin in late 2007, with completion in 2012.

In the 1970s, an anti-nuclear movement in France, consisting of citizens' groups and political action committees, emerged. There were many large anti-nuclear protests and demonstrations. More recently, targeted campaigns have been conducted, mainly by Greenpeace, and Sortir du nucléaire (France) has called for an official safety inspection of the Areva facilities. 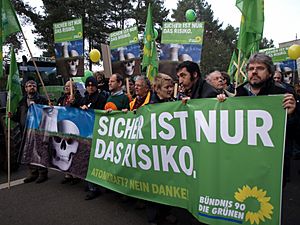 In 2000, the German government, consisting of a coalition including the Green party Alliance '90/The Greens officially announced its intention to phase out nuclear power in Germany. Jürgen Trittin, the Minister of Environment, Nature Conservation and Nuclear Safety, reached an agreement with energy companies on the gradual shut down of the country's nineteen nuclear power plants and a cessation of civil usage of nuclear power by 2020. Legislation was enacted in the Nuclear Exit Law. The power plants in Stade and Obrigheim were turned off on November 14, 2003, and May 11, 2005, respectively. Dismantling of the plants is scheduled to begin in 2007. But the Nuclear Exit Law did not ban enrichment stations - one in Gronau has received permission to extend operations. There have been concerns over the safety of the phase-out, particularly in terms of the transport of nuclear waste. In 2005 Angela Merkel won the German federal election in 2005 with the CDU party. She has subsequently announced to re-negotiate with energy companies the time limit for a shut down of nuclear power stations. But as part of her pact with the SPD, with whom the CDU form a coalition, the phase-out policy has for now been retained.

In November 2008, a shipment of radioactive waste from German nuclear plants arrived at a storage site near Gorleben after being delayed by large protests from nuclear activists. More than 15,000 people took part in the protests which involved blocking trucks with sit-down demonstrations and blocking the route with tractors. The demonstrations were partly a response to conservative calls for a rethink of the planned phaseout of nuclear power stations.

On 16 July 2007 a severe earthquake hit the region where Tokyo Electric's Kashiwazaki-Kariwa Nuclear Power Plant is located. The plant with seven units is the largest single nuclear power station in the world. All of the reactors were shut down and are expected to remain closed for damage verification and repairs for at least one year.

During the Fukushima nuclear disaster there was a failure of cooling systems at Fukushima Daiichi Nuclear Power Plant in Japan on March 11, 2011, and a nuclear emergency was declared. This was the first time a nuclear emergency had been declared in Japan, and 140,000 residents within 20 km of the plant were moved out. Explosions and a fire resulted in dangerous levels of radiation, resulting in a stock market collapse and panic-buying in supermarkets.

As of 2007 in the United States, there are 104 (69 pressurized water reactors and 35 boiling water reactors) commercial nuclear generating units licensed to operate, producing a total of 97,400 megawatts (electric), which is approximately 20% of the nation's total electric energy consumption. The United States is the world's largest supplier of commercial nuclear power.

The Three Mile Island accident has been the most serious accident experienced by the U.S. nuclear industry. Other accidents include those at the Davis-Besse Nuclear Power Plant, which has been the source of two of the top five most dangerous nuclear incidents in the United States since 1979, according to the Nuclear Regulatory Commission.

Many plants have recently received 20-year extensions to their licensed lifetimes.

All content from Kiddle encyclopedia articles (including the article images and facts) can be freely used under Attribution-ShareAlike license, unless stated otherwise. Cite this article:
Nuclear energy policy Facts for Kids. Kiddle Encyclopedia.