Kids Encyclopedia Facts
This article is about the community in Haywood County, Tennessee. It is not to be confused with Nutbush, Memphis. 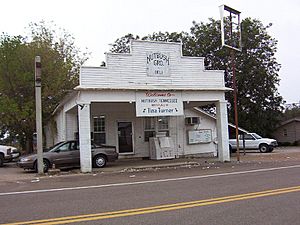 Nutbush is a rural unincorporated community in Haywood County, Tennessee, in the western part of the state. It was established in the early 19th century by European-American settlers who brought along or bought enslaved African Americans as workers to develop the area's cotton plantations. The African Americans built the fine houses and churches that still stand.

Agriculture is still the dominant source of income in the area, focused on the cultivation and processing of cotton. This was the commodity crop in the antebellum years, when its cultivation depended on slave labor. As of 2006, cotton was processed in one cotton-processing plant in the community.

Nutbush is best known as the birthplace and childhood home of singer Tina Turner, who described the town in her 1973 song "Nutbush City Limits". In 2002, a segment of Tennessee State Route 19 near Nutbush was named "Tina Turner Highway" in her honor. This is also the home town of blues pioneer musicians and recording artists Hambone Willie Newbern and Sleepy John Estes. 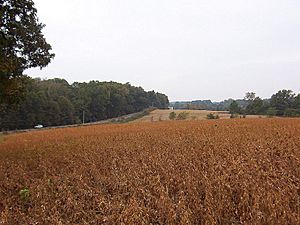 The Nutbush community was established in the early 19th century by settlers from Virginia and North Carolina. Descended from immigrants from England, they traveled westward to the Mississippi River delta in western Tennessee. They developed this area for cotton and were dependent on the use of slave labor.

These settlers founded Trinity United Methodist Church was founded in 1822. During the slavery years, black slaves were encouraged to attend the church under white supervision. More than 50 Civil War soldiers, both Confederate and Union, are buried in the Trinity Cemetery associated with the church. The Trinity Cemetery is mentioned as one of the best-kept cemeteries in the county. 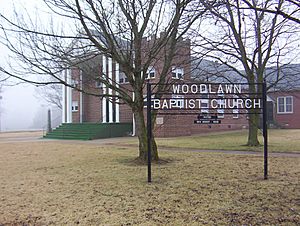 After the American Civil War, the Woodlawn Missionary Baptist Church was established in 1866 by Hardin Smith and other freed slaves of the community, aided by some members of the white Woodlawn Baptist Church. The freedmen soon withdrew from white supervision, as did most black Baptists in the South, establishing their own regional and national associations by the end of the century.

Woodlawn Baptist Church was added to the National Register of Historic Places in 1996 for its historical significance.

Cotton fields and hills dominate the landscape of the surrounding area. Nutbush is situated on the southeastern edge of the New Madrid Seismic Zone, an area with a high earthquake risk.

The early Black musicians and singers from the Nutbush churches recorded and influenced an international audience. Prominent recording artists include Hambone Willie Newbern and Sleepy John Estes. Harmonica player Noah Lewis of Henning, Tennessee is buried in an area cemetery near Nutbush. 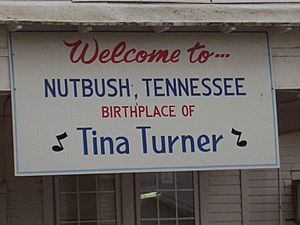 Nutbush is the childhood home of singer Tina Turner.

Nutbush is best known as the childhood home of singer Tina Turner, then known as Anna Mae Bullock. At age 16, she moved to St. Louis, Missouri.

After her birth in 1939, Bullock was raised in Nutbush, Brownsville, and Ripley by her maternal grandmother and extended family in the area. The houses she lived in as a child no longer exist. Wood from her Nutbush/Flagg Grove home was used to build a barn.

Both Woodlawn Missionary Baptist Church and Spring Hill Baptist Church in Nutbush were family churches of Tina Turner. She attended and sang in both choirs growing up. Her family members were church officials, musicians and singers; various members are buried in these two cemeteries. 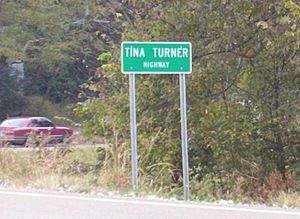 In 2002, Tennessee State Route 19 between Brownsville and Nutbush was officially designated as "Tina Turner Highway" in her honor.

All content from Kiddle encyclopedia articles (including the article images and facts) can be freely used under Attribution-ShareAlike license, unless stated otherwise. Cite this article:
Nutbush, Tennessee Facts for Kids. Kiddle Encyclopedia.