Oakley is a city in Gove, Logan, and Thomas counties in the U.S. state of Kansas. It is the county seat of Logan County. As of the 2010 census, the city population was 2,045.

The area that would later become Oakley was initially settled in the 1870s and 1880s by travelers from the Smoky Hill Trail. Oakley was founded in 1884 by Judge Fredman and David D. Hoag. Originally named Carlyle, its name was changed to Cleveland, before settling on its official name in 1885, named after Hoag's mother, Elizabeth Oakley Gardner Hoag.

The city is located at the intersection of Interstate 70, U.S. Route 40, and U.S. Route 83 in northwest Kansas. It is in the northeast corner of Logan County, and portions of it extend into Gove County and Thomas County. Oakley is approximately 211 miles (340 km) northwest of Wichita, 227 miles east-southeast of Denver, and 335 miles (539 km) west of Kansas City.

According to the United States Census Bureau, the city has a total area of 1.94 square miles (5.02 km2), all of it land.

The climate in this area is characterized by hot, humid summers and generally mild to cool winters. According to the Köppen Climate Classification system, Oakley has a humid subtropical climate, abbreviated "Cfa" on climate maps.

There were 920 households of which 25.9% had children under the age of 18 living with them, 49.9% were married couples living together, 7.6% had a female householder with no husband present, 3.6% had a male householder with no wife present, and 38.9% were non-families. 35.0% of all households were made up of individuals and 16.7% had someone living alone who was 65 years of age or older. The average household size was 2.18 and the average family size was 2.78.

There were 904 households out of which 27.5% had children under the age of 18 living with them, 56.4% were married couples living together, 7.1% had a female householder with no husband present, and 33.2% were non-families. 30.4% of all households were made up of individuals and 15.9% had someone living alone who was 65 years of age or older. The average household size was 2.34 and the average family size was 2.94. 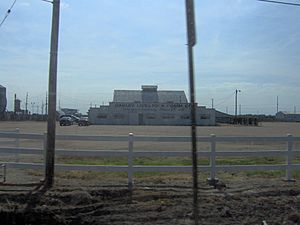 Stockyard on the edge of Oakley

The Fick Fossil and History Museum is a museum that displays large dinosaur fossils from Kansas, many old tools, mineral specimens, and shell and mineral folk art. The museum is free (donations) and open seven days a week in the summer, with shorter hours during the winter. 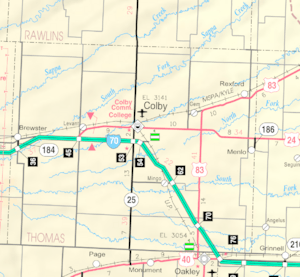 The Kansas Pacific (KP) Line of the Union Pacific Railroad runs east–west through town. A branch line splits off to the northwest toward Colby.

The Palace Theatre in Oakley has been featured in People magazine and ABC World News Tonight after the establishment reopened in 2003 after being forced to close indefinitely two years prior. It is a community run theatre and is managed by senior students in the Oakley High School entrepreneurship class. See the ABC World News video here

The 2006 CBS television series Jericho is about a fictional small town in northwest Kansas that must cope with the aftermath of nuclear attacks on major American cities. The fictional town of Jericho shares many similarities with Oakley, which is about 70 miles (110 km) from the Colorado–Kansas border. Oakley and Jericho also share the same intersection points of Interstate 70, U.S. Route 83, and U.S. Route 40.

All content from Kiddle encyclopedia articles (including the article images and facts) can be freely used under Attribution-ShareAlike license, unless stated otherwise. Cite this article:
Oakley, Kansas Facts for Kids. Kiddle Encyclopedia.