Kids Encyclopedia Facts
(Redirected from Obligations to neighbours in Islam) 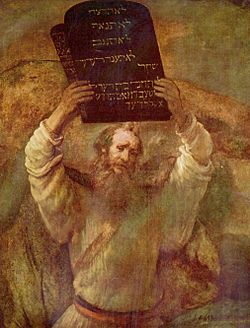 The Ten Commandments, according to the book of Exodus in the Bible, are rules for life given by God to Moses on Mount Sinai to give to the People of Israel. Although the Book of Deuteronomy talks about Mount Horeb, it is often considered to have been a different name for the same place. The rules were written on stone tablets. These rules are important for Judaism and Christianity.

Sometimes these rules are also called Decalogue (from Greek, can be translated as ten statements). The name decalogue first occurs in the Septuagint. The Jews received the commandments after they had left Egypt during the reign of Pharaoh Ramses. There are different texts talking about the commandments. Most of them are in the Bible: The Book of Exodus, Chapter 20 and the book of Deuteronomy, Chapter 5. The Qu'ran mentions the tablets but does not list the commandments. Because the Bible has been translated many times, there are variations in the way the commandments are written.

The Ten Commandments are

The Bible in Basic English translates the commandments from Exodus in this way:

Differences in teachings and interpretation

These commandments are translated from ancient Hebrew to Basic English, so the exact words chosen may not mean to us exactly what they meant to the Hebrews. There are a variety of interpretations of these commandments: 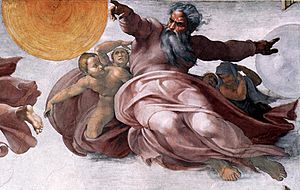 The Creation of the Sun and the Moon is a fresco in the Sistine Chapel. It was done by Michelangelo. It shows an image of God.

One understanding on the commandment to not make "any image, or any likeness of any thing that is in heaven above" is as from Roman Catholicism: they hold that "likenesses" may be built and used, as long as the object is not worshipped. The Eastern Orthodox Church has a very similar position. Eastern Orthodoxy teaches that the incarnation of an invisible God as a visible human, Jesus, makes it alright to worship images (see Iconoclasm). But, for Jews, Muslims, and most other Christians that violates the commandment.

Jehovah's Witnesses criticize the use of all of the above, as well as the use of the cross. The Amish forbid any sort of image, such as photos.

Jews honor the Sabbath (Shabbat) on Saturday, the seventh day of the week on the Jewish calendar.

Most Christians honor the Sabbath on Sunday to remember the Resurrection of Jesus on the first day of the week on the Jewish calendar.

Some conservative Christians are "Sabbatarians" (most of these follow the Reformed traditions). Sabbatarians think the first day of the week or Lord's Day is the new Sabbath, because the 4th commandment has never been revoked and Sabbath-keeping is in any case a creation ordinance.

Others believe that the Sabbath remains as a day of rest on Saturday, while Sunday as a day of worship, in reference to Acts 20:7: the disciples came together on the first day of the week to break bread and to hear the preaching of the apostle Paul. Also, Jesus appeared to his followers on the "first day of the week" while they were in hiding.

The Seventh-day Adventist Church, and some others, believe that the custom of meeting for worship on Sunday originated in paganism, specifically Sol Invictus and Mithraism (in which sun god worship took place on Sunday). Instead, Adventists keep Saturday as the Sabbath as a memorial to God's work of creation believing that none of the Ten Commandments can ever be destroyed. Seventh-day Sabbatarians claim that the seventh day Sabbath was kept by the majority of Christian groups until the 2nd and 3rd century, but because of opposition to Judaism after the Jewish-Roman wars, the original custom was gradually replaced by Sunday as the day of worship.

To stay true to who you are married to.

In the New Testament, Jesus talked about who was guilty of breaking these commandments. He said that even if someone was just angry and rude to another person, he might be judged for murder, and if he just looked with desire or lust at a woman, he had committed adultery in his heart.

Many theologians (such as German Old Testament scholar A. Alt: Das Verbot des Diebstahls im Dekalog (1953)) suggest that commandment "you shall not steal" was originally intended against stealing people—abductions and slavery. This would be the same as the Jewish interpretation of the statement as "you shall not kidnap" (e.g. as stated by Rashi).

To "give false witness" called lying, may include all lying, or only lying in court, which is called perjury.

The Bible does not number the commandments. Different religious groups have numbered them in different ways. The Jews, followed by Christian Protestants, end the first commandment with "You are to have no other gods but me." as above. Catholics and Lutherans end the first commandment at "I will have mercy through a thousand generations on those who have love for me and keep my laws." and separate in their last two commandments the desire for a man's wife from the desire for other things he owns.

The commandments passage in Exodus has more than ten important statements, there are 14 or 15 in all. While the Bible itself gives the count as "10", using the Hebrew phrase ʻaseret had'varim—translated as the 10 words, statements or things, this phrase does not appear in the passages usually presented as being "the Ten Commandments". Various religions divide the commandments differently. The table below shows those differences.

Islam teaches that the Bible is a revelation from God, but that the text used in Judaism and Christianity has been corrupted. The Ten Commandments are not explicitly mentioned in the Qur'an, but each is implied by the following verses in the Quran.

In general, religions other than those mentioned (Judaism, Christianity, Islam) do not recognise the Ten Commandments as ethical standards. Many of them (Buddhism, Hinduism, Jainism, etc.) have similar laws or principles though. In the atheist Soviet Union the Moral Code of the Builder of Communism was a set of rules that resembled the Ten Commandments.

The term "Ten Commandments" generally applies to the list mentioned in Exodus 20 and Deuteronomy 5. However, there is a continuous story being told starting in Exodus 31:18 (where the stones are created), Exodus 32:19 (where the tablets are broken) and Exodus 34. This story lists a very different set of commandments. This version is sometimes called "Ritual Decalogue". Johann Wolfgang von Goethe and the people after him who followed the documentary hypothesis, note that Exodus 34:28 seems to refer to these Ten Commandments rather than the traditional ones. These people thought that the commandments in Exodus 20 and Deuteronomy 5 show a later set of Ten Commandments, and that the ten listed in Exodus 34 were the original Ten Commandments, now known as the Ritual Decalogue (as opposed to the better-known "Ethical Decalogue"). The differences between the two Decalogues highlight the development of sacred texts over a long time and from differing narrative traditions by incorporating two differing sets of Ten Commandments.

The commandments have influenced Jewish ethics and law and, through Judaism and Christianity, Western ethics and law since the Roman Empire. Moses is the founder of basis of the philosophy of law as well as such modern legal doctrines as independent judiciary and separation of powers.

There have been two famous films of this name; both were directed by Cecil B. DeMille, a silent movie in 1923, and a movie in 1956, starring Charlton Heston as Moses. That one was the biggest money-making movie that year.

All content from Kiddle encyclopedia articles (including the article images and facts) can be freely used under Attribution-ShareAlike license, unless stated otherwise. Cite this article:
Ten Commandments Facts for Kids. Kiddle Encyclopedia.