Ocean Beach lies on the Pacific Ocean at the estuary of the San Diego River, at the western terminus of Interstate 8. Located about 7 miles (11 km) northwest of Downtown San Diego, it sits south of Mission Bay and Mission Beach and directly north of Point Loma. The O.B. community planning area comprises about 1 square mile (742 acres), bounded on the north by the San Diego River, on the west by the Pacific Ocean, on the east by Froude St., Seaside St. and West Point Loma Boulevard, and on the south by Adair Street. 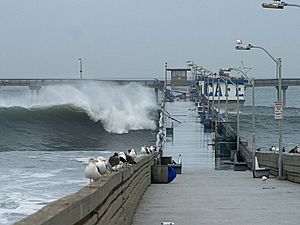 Waves crashing over the Ocean Beach Pier in 2002

The beach's initial name was Mussel Beach, for the mussels available there. Its current name, Ocean Beach, was given in 1887 by developers Billy Carlson and Albert E. Higgins.

The pair built the Cliff House, a resort hotel, and subdivided the area into lots. To promote their subdivision, Carlson and Higgins organized various activities, including mussel roasts and concerts. Despite their efforts, the development did not do well, because it was two and a half hours by carriage from downtown San Diego. They rented a locomotive, but by that time, the boom ended and the development was put on hold. The Ocean Beach Railroad, launched in April 1888, was a casualty of the economic decline. Passengers could take a ferry from San Diego to Roseville in Point Loma to ride the train to the Cliff House. Later, Higgins committed suicide, and a fire started by a fallen chandelier burnt down the Cliff House in 1898. Carlson sold the Ocean Beach tract to an Eastern financier, delaying its development for 20 years.

Carlson and Higgins were not the first to file a subdivision map in Ocean Beach. They filed with the city on May 28, 1887, but on April 22 of that year J.M. DePuy filed "DePuy's Subdivision" on 15 blocks in the northern portion of O.B.

One of the earliest residents of Ocean Beach was D. C. Collier, who bought oceanfront property there in 1887 when he was just 16. He later became one of the "fathers" of Ocean Beach, laying out streets, promoting sales, and building the Point Loma Railroad in 1909 to connect Ocean Beach with the rest of San Diego. By 1910 there were 100 houses in Ocean Beach, compared to just 18 two years earlier. According to historian Ruth Held, Collier's rail line "made OB possible." He also built Ocean Beach Elementary School (a two-room school) and donated park land to the city. Most of that land became Cleator Community Park (a ballfield), Correia Middle School (originally named Collier Junior High School), a YMCA and a church; a small remnant at Greene and Soto streets is still called Collier Park.

The northern end of Ocean Beach was dominated in the early 20th century by the Wonderland Amusement Park, which opened on July 4, 1913 and was constructed on eight oceanfront acres at Voltaire and Abbott streets. It boasted a large roller coaster, dance pavilion, menagerie, roller skating rink, merry-go-round, children's playground, a petting zoo with a variety of animals including 500 monkeys, and 22,000 lights outlining the buildings. However, Wonderland went bankrupt in 1915 due to competition from the Panama-California Exposition in Balboa Park and was sold at auction. It closed in 1916 after winter storms damaged the roller coaster. The name "Wonderland" lives on in some Ocean Beach business names as well as the title of a documentary series on KPBS television hosted by Ocean Beach native Noah Tafolla.

The small cottages, bungalows, single-family homes and two-storied apartments in the residential areas, were filled with college students from several local colleges, joined by a good number of sailors, retirees and middle-class families. Some of the bungalows built as tourist accommodations atop the cliffs on either side of Niagara Avenue are still in use as businesses and homes.

With the dredging and development of Mission Bay and the dismantling of the Ocean Beach-Mission Beach bridge, O.B. became geographically isolated from the rest of San Diego and the other beach communities, until the construction of Interstate 8 in 1967. The westernmost segment of I-8 from Interstate 5 to the terminus in Ocean Beach is officially labeled the "Ocean Beach Freeway".

Surfing was introduced to San Diego at Ocean Beach in 1916 when a local lifeguard borrowed a board from Duke Kahanamoku (although it's possible that George Freeth surfed there between 1907 and 1909). By 1966, the sport was sufficiently established that the World Surfing Championship was held in O.B. Nat Young won the event and was named world surfing champion.

Ocean Beach was once known as the Haight-Ashbury of San Diego. The community became an attraction for hippies, who eventually became accepted by many local business establishments. The Black headshop opened on Newport Avenue, as well as the Ocean Beach People's Organic Food Market.

There are a number of other individual San Diego Historic Landmarks in Ocean Beach. Designated city historic landmark buildings are the Ocean Beach Library and Strand Theater.

Residents of Ocean Beach often refer to themselves as "OBceans" or "OBecians," which is pronounced "oh-BEE-shun" (although the proper spelling is a matter of dispute).

The northern end of O.B.'s waterfront is known as Dog Beach. It's open 24 hours a day for leash-free dogs and was one of the first such beaches in the United States (founded in 1972).

Ocean Beach and adjacent Point Loma are home to a sizable population of feral parrots and their offspring, known locally as the "O.B. air force." The sub-tropical climate is nearly ideal for parrots. The parrots, mostly Amazons, are most active and vocal at sunrise and sunset.

All content from Kiddle encyclopedia articles (including the article images and facts) can be freely used under Attribution-ShareAlike license, unless stated otherwise. Cite this article:
Ocean Beach, San Diego Facts for Kids. Kiddle Encyclopedia.