The hindwings are green. At the wing's leading edge (costa) there are basal yellow-gold spots. There is also a postdiscal chain of black spots. The edge of the hindwing is black.

The underside is dark green or bluish. The yellow-golden spots are transparent. The veins are partly black and the marginal edge of the wing is black. At the outer edge there is a postdiscal chain of black spots.

The body (abdomen) is yellow. Head and thorax are black. The underside of thorax has a red hair coat. 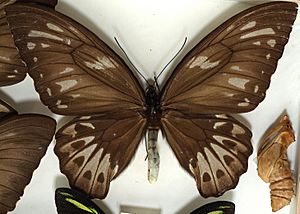 Pupa: The pupa is yellowish green or brown and is marked with greyish veins as in a leaf. It may have a broad dorsal pale saddle mark. The abdomen has eight pairs of sharp dorsal processes, directed laterally. 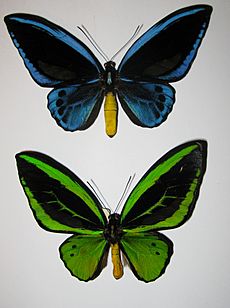 Males of O. p. urvillianus (above) and O. p. poseidon (below), showing some distinct variations. The former has sometimes been regarded as a separate species, but hybrids between these subspecies are viable.

Ornithoptera priamus is a variable species. It was originally described from Seram Island of Indonesia. As in other species of the genus Ornithoptera, the females are larger and less vividly coloured than the males, them being mainly blackish or dark brown with patterns in pale brown, yellow or white. Nonetheless, females are extremely variable, and they may have colour patterns similar to females of other Ornithoptera species.

However, it is likely that O. p. miokensis is actually a hybrid between O. p. urvillianus and O. p. bornemanni from the neighbouring islands of New Britain and Bougainville. Specimens of this subspecies are variable, and can be identical to specimens of either parent, or intermediates. Immigration may also explain its rarity, as Mioko is a small island and, as of 2001, its host plants had been reduced to a few Aristolochia tagala vines growing in a local village.

There have been as many as 99 subspecies described (most of which are synonyms of O. p. poseidon), with many more named variants and forms described for both sexes. Some list as few as six subspecies (including nominate), but a taxonomic review is needed and most recognise more: 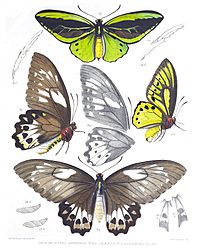 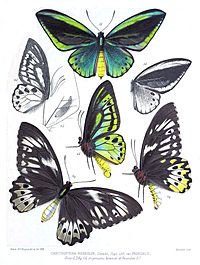 Overall this species remains widespread, but some subspecies are threatened by habitat destruction, with those endemic to smaller islands (e.g. O. p. miokensis and O. p. boisduvali) of greatest conservation concern. Like all birdwing butterflies, O. priamus is listed on CITES appendix II, which restricts international export to those in possession of a permit.

All content from Kiddle encyclopedia articles (including the article images and facts) can be freely used under Attribution-ShareAlike license, unless stated otherwise. Cite this article:
Ornithoptera priamus Facts for Kids. Kiddle Encyclopedia.