Kids Encyclopedia Facts
Not to be confused with Osceola County, Iowa.

Osceola is a city in Clarke County, Iowa, United States. The population was 5,415 at the time of the 2020 census. It is the county seat of Clarke County. 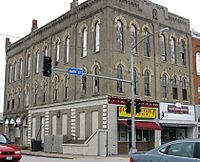 The historic and endangered Masonic Building

Osceola was named after a Seminole Indian leader of the same name. Osceola is an anglicised form of Asiyahola: assi, from a ceremonial yaupon holly tea or "black drink" and yaholi, the name of a Creek god intoned when the drink was served.

The Masonic Building stands on the public square in Osceola. Built in 1872, this Italianate building was used by Osceola Lodge No. 77 of the Ancient Free & Accepted Masons, and the main floor was a bank and hardware store. This building was placed on the Iowa Historic Preservation Alliance’s Most Endangered list due to its poor repair and lack of preservation plan. In 2011 the building was renovated with help from various grants. The second and third floors were converted into upscale apartments. The China Star restaurant was remodeled and now utilizes both halves of the lower level. The exterior received an overdue face lift to restore the building to its original appearance. All of the windows were replaced and the stucco was repaired and painted. Structural improvements included foundation work and a new roof. The front entrances were replaced with a more traditional wood columns and tall glass windows.

Lakeside Casino Resort operates on West Lake. The river boat-themed casino has been in continuous operation since about 2000, although it has been bought and sold twice since it has opened. Terrible Herbst gaming purchased the casino around 2005. After a major renovation to the complex, which included a $1 million 132-foot-tall sign along the adjacent interstate, took place around 2006. The parent company filed for bankruptcy and the casino was sold yet again. The original and familiar Lakeside name was brought back and the large cowboy sign along the interstate was converted into a slightly smaller, more traditional sign.

A Pilot truck stop was built in late 2010 along the interstate, in place of the former Terribles Casino gas station.

Amtrak, the national passenger rail system, provides service to Osceola, operating its California Zephyr daily in both directions between Chicago and Emeryville. A bus connection is available from Osceola to Des Moines.

All content from Kiddle encyclopedia articles (including the article images and facts) can be freely used under Attribution-ShareAlike license, unless stated otherwise. Cite this article:
Osceola, Iowa Facts for Kids. Kiddle Encyclopedia.