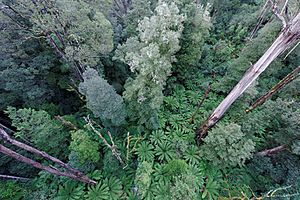 The Great Otway National Park, located in the Barwon South West region of Victoria, Australia. The 103,185-hectare (254,980-acre) national park is situated approximately 162 kilometres (101 mi) southwest of Melbourne. It contains a diverse range of landscapes and vegetation types and is situated within the Otway Ranges.

The Otway forests enjoy a long logging history and have been a rich source of timber for over 150 years. The production peaked in 1961 but has since reduced over the years. The forests standing tall today showcase the time needed to regrow and reproduce the giants of the past. Historically several wildfires have burnt through the park in this century which shape its ecology and plant and animal diversity - the last major fire was Ash Wednesday in 1983.

The park was declared in 2004 when Otway National Park, Angahook-Lorne State Park, Carlisle State Park, Melba Gully State Park, areas of the Otway State Forest and a number of Crown Land reserves were combined into one park. The parks were combined after a campaign by the local community and the Otway Ranges Environment Network and were officially gazetted on 11 December 2005 (2005-12-11).

The park is a popular area for interstate and international tourists, with companies operating tours in the region. It contains three camping areas at Johanna, Aire River and Blanket Bay. The park is accessed from the east via Apollo Bay, from the north via Forrest or Beech Forest, or from the west via Princetown. The park covers both coastline and hinterland in the Otway Ranges and so includes both beaches and forest, accessible via walking trails. The park and the Aire River campground are home to a significant koala population. The Cape Otway Lighthouse is adjacent to the park and is open to tourists throughout the week. Migrating whales and dolphins such as southern right and southern humpback, and bottlenose dolphins can be observed from the coasts.

The park has been identified by BirdLife International as an Important Bird Area (IBA) because it supports populations of rufous bristlebirds, striated fieldwrens and pink robins, as well as numerous other species.

Climate data for the Otway Ranges are sourced from Weeaproinah, at an elevation of 492 metres (1,614 ft); operating between 1965 and 2012. A cool and extremely wet climate, especially during the winter, owing to its westerly exposure. Heavy, wet snowfalls often occur on the higher peaks, such as Mount Cowley at 670 metres (2,200 ft) AMSL.

The Great Otway National Park is extremely rich in fungal diversity. Although hundreds of species of flora and fauna are listed in the Great Otway National Park Management Plan, there is only a single reference to fungi. The reference is to the fungal pathogen, Chalara australis that affects myrtle beech. However, the great majority of fungi in the Park perform beneficial ecological roles. In fact, most fungi perform positive rather than negative roles. Even parasitic fungi – often regarded only negatively – are a vital part of healthy ecosystems, regulating ecosystem functions.

As primary recyclers of organic matter, saprobic fungi break down fallen branches and leaf litter, making vital nutrients available to other organisms. Other fungi form symbiotic relationships with other organisms. Although rarely acknowledged, the great majority of plants in the Great Otway National Park (indeed in the world) form mutually beneficial mycorrhizal relationships with fungi.

Given the great diversity of plants, specialist habitats and micro-climates in the park, a great diversity of fungi, including lichens, is also expected to occur there. Two hundred and seventy-eight species of fungi are listed in the Atlas of Living Australia. This is likely to be only a fraction of the total number of fungal species that grow in the Park.

Despite their essential roles in underpinning terrestrial ecosystems, fungi are barely recognised as a vital part of Australia's biodiversity. Although Australia has national and state level biodiversity conservation strategies and has ratified international conventions, most overlook fungi. There is currently no statewide biodiversity strategy for managing biodiversity in Victoria and the Colac Otway Shire Environment Strategy makes no reference to fungi. There is however, a great deal of interest in fungi among the local community. The Southern Otways Landcare Network have been actively involved in learning about and surveying the Park's fungi in recent years and produced a guide to one hundred of the more easily recognisable fungal species found in the park.

The Australian citizen-science organisation, Fungimap is also documenting and mapping the distribution of fungi including those that occur in the Great Otway National Park.

One of the tiniest yet conspicuous species found in the wetter parts of the park is the ruby bonnet (Mycena viscidocruenta). The ghost fungus (Omphalotus nidiformis) grows on trees and is another easily recognisable species, especially at night when it glows a pale green. The rosette fungus (Podoscypha petalodes) often appears in funnel-shaped rosettes at the base of trees and among leaf litter and is widespread throughout the park. The flame fungus (Clavaria miniata) grows singly or in groups on soil.

All content from Kiddle encyclopedia articles (including the article images and facts) can be freely used under Attribution-ShareAlike license, unless stated otherwise. Cite this article:
Great Otway National Park Facts for Kids. Kiddle Encyclopedia.