Pacific Central Station is a railway station in Vancouver, British Columbia, Canada, which acts as the western terminus of Via Rail's cross-country The Canadian to Toronto and the northern terminus of Amtrak’s Cascades to Seattle and Portland. The station also provides intercity bus service as the main Vancouver terminal for Greyhound Lines. The station is wheelchair-accessible and is staffed with full Via services.

The Amtrak Cascades provides two daily round trips from Vancouver. One goes to Seattle, Washington; the other continues on to Portland, Oregon. Rather than stopping for an immigration inspection at the border, as happens with the Adirondack to Montreal and Maple Leaf to Toronto, Amtrak passengers go through Canadian customs at the station upon arrival. Passengers bound for the United States go through United States border preclearance prior to boarding in Vancouver. 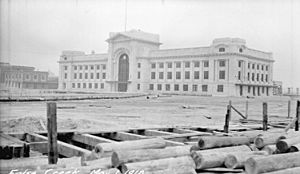 The station in 1918, known as False Creek Station, shows the land around the building being filled in.

Pacific Central Station was dedicated on November 2, 1919, a day after the first trains began using the station. It was originally named False Creek Station and was designed by the architecture firm Pratt and Ross. The building was designated a heritage railway station in 1991.

Amtrak service to the terminal was originally offered on the Pacific International from 1972 to 1981, when it ceased due to budget cuts. Cross-border service returned in 1995 with the introduction of the Mount Baker International, which was later folded into the modern-day Cascades brand.

On November 8, 2010, the Canadian government announced a CA$5.1-million plan to rebuild parts of the station, including refurbishing windows, masonry, and the roof of the building.

All content from Kiddle encyclopedia articles (including the article images and facts) can be freely used under Attribution-ShareAlike license, unless stated otherwise. Cite this article:
Pacific Central Station Facts for Kids. Kiddle Encyclopedia.