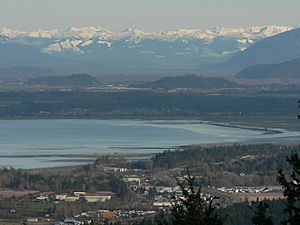 Padilla Bay is a bay located in the U.S. state of Washington, between the San Juan Islands and the mainland. Fidalgo Island and Guemes Island lie to the west of Padilla Bay. Guemes Channel, between the islands, connects Padilla Bay to Rosario Strait. Samish Island lies to the north of Padilla Bay, beyond which is Samish Bay and Bellingham Bay.

Padilla Bay is a tidal bay. It is entirely flooded at high tide and at low tide mudflats are exposed. These mud flats are habitat for many species of birds and animals. The bay is very shallow. Near Hat Island the bay is only 12 feet (4 m) deep. Part of the estuary tidal flats are contained by dikes built in order to make farmland out of the mudflats. The Swinomish Channel is a salt-water channel in Washington State, United States, which connects Skagit Bay, to the south, and Padilla Bay, to the north, separating Fidalgo Island from mainland Skagit County. In the past, the Skagit River had emptied into Padilla Bay.

The Padilla Bay National Estuarine Research Reserve is an area of 8,004 acres (32 km2) of estuary located in Skagit County. The reserve contains the Breazeale Interpretive Center, which features exhibits about the natural history and ecology of the estuary and bay, fish tanks, a hands-on room and a video theater.

The site also features classrooms, research facilities, and public access to a beach site. It is a popular location for graduate studies from Western Washington University and the University of Washington.

Padilla Bay is a part of the National Estuarine Research Reserve which it was incorporated into in 1980. It is managed by the Washington Department of Ecology. It has several trails. There is a wheelchair trail to the observation deck as well as a shore trail that is 2.25 miles (3.62 km) long and runs along the top of the dikes.

The research center is located in the Skagit Valley of Washington. The nearest town is Anacortes, Washington about 6 miles (10 km) away.

All content from Kiddle encyclopedia articles (including the article images and facts) can be freely used under Attribution-ShareAlike license, unless stated otherwise. Cite this article:
Padilla Bay Facts for Kids. Kiddle Encyclopedia.