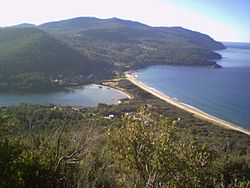 Land on both sides of Eaglehawk Neck between the Tasman Peninsula and Forestier Peninsula, is in Pembroke land district

The County of Pembroke, bounded on the north by Little Swan port river; on the east by the Pacific ocean; on the south by Storm bay, and on the west by Storm bay, Norfolk bay, Pittwater, and by the eastern boundaries of the parishes of Ulva, Staffa and Ormaig, and a line to the south east angle of the county of Somerset. This county to include the White Rock, Maria island, Lachlan island, the Hippolyte rocks, Tasman's island, Wedge island, Sloping island, Garden island (now Smooth Island), Low island (now 'Green Island'), the islands in Pittwater, and all other islands adjacent to the coasts of the county.

The township of Sorell was proclaimed as being within the county.

All content from Kiddle encyclopedia articles (including the article images and facts) can be freely used under Attribution-ShareAlike license, unless stated otherwise. Cite this article:
Pembroke Land District Facts for Kids. Kiddle Encyclopedia.