Photoblepharon palpebratum, the eyelight fish or one-fin flashlightfish, is a species of saltwater anomalopid fish of the order Beryciformes. It is native to the western and central Pacific Ocean where it is found along seaward reefs close to the ocean floor, usually near rocks and corals it can use as cover. At only 12.0 cm (4.7 in) in length, it is a small fish, and more stout than other members of its family. Its body is mostly black, with a line of reflective scales running the length of its body and a distinguishing white spot at the upper corner of its preopercle. Its most notable features are its subocular bioluminescent organs which it likely uses to attract and find prey, confuse predators, and communicate with other fish. These organs are blinked on and off by the fish using a dark lid that slides up to cover them.

The eyelight fish is a nocturnal predator, spending the day hidden in caves and crevices in the rock, and emerging at night to search for food. It generally hunts in large groups away from the reef. Like other members of its family, its reproduction is oviparous. Mated spairs spawn near the ocean surface and females can produce as many as 1,000 eggs per cycle. It is of little commercial value to fisheries, its only real use being as bait for local fishermen, but has been displayed in public aquariums. It is listed as Data Deficient by the International Union for the Conservation of Nature because its nocturnal habits make its collection difficult and sightings uncommon.

The first scientific description of the eyelight fish was authored by Dutch naturalist Pieter Boddaert in his 1781 piece, Beschreibung zweier merkwürdiger Fische, part of the larger volume Neue Nordische Beyträge zur physikalischen und geographischen Erd- und Völkerbeschreibung, Naturgeschichte und Oekonomie, 2 by German zoologist Peter Simon Pallas. He named the species Sparus palpebratus, its generic name being the Latin word "sparus" meaning "a fish with a golden head." It was later assigned to the genus "Photoblepharon" by German-Dutch zoologist Max Carl Wilhelm Weber in 1902. Its current genus name derives from Greek: "photo" meaning "light" and "blepharon" meaning "eye lash." Its congener, P. steinitzi, was originally classified as a subspecies of this fish, P. palpebratus steinitzi. It was reclassified as its own species in 1987 by ichthyologists John E. McCosker and Richard H. Rosenblatt.

The eyelight fish is considered one of the more derived members of Anomalopidae, most closely related to Krypotophaneron with the exception of P. steinitzi. Its reflective lateral-line scales are shared by Kryptophaneron and Phthanophaneron, but are enlarged for only Kryptophanaraon and Photoblepharon, indicating that they are a unique trait of the two. Refinement of the shutter mechanism down the cladogram is further confirmation of its placement of genera.

It is distinguished from its congener, P. steinitzi, in a number of ways, one indicator being the white spot on its preopercle. P. steinitzi has either no white spot or a smaller, darker spot, as well as more ornamented head bones.

Its most distinguishing features are the cream-colored light organs underneath its eyes, which produce blue-green light likely used by the fish to attract prey, communicate with other fish, and frighten and confuse predators. These organs contain bioluminescent bacteria, fed by oxygen and nutrients from the fish's bloodstream, which emit a constant light. The eyelight fish uses a black lid to cover the organs when it does not want to emit light.

The eyelight fish has a wide range in the western and central Pacific Ocean, from the Philippines in the west to the Society Islands in the east, as well as south to New Caledonia. Its latitudinal range is between 19°N and 24°S. It was originally thought to be found only in Indonesia, but has since been seen near Guam and caught off the coasts of Australia, the Marshall Islands, the Caroline Islands, the Cook Islands, and Papua New Guinea. Because its nocturnal habits make sightings and collections uncommon, the extent of its range is not fully understood, and likely contains other localities.

It lives in or near seaward reefs with steep drop-offs and caves, and is generally found alone or in pairs. When hunting it remains close to the ocean floor. Its preferred water temperatures are between 18 and 29 °C (64 and 84 °F). It is usually seen by humans no deeper than 15 m (49 ft), but its depth range extends as far as 50 m (160 ft) below the surface. 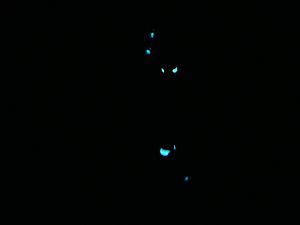 The eyelight fish spends the day hidden in caves and crevices and emerges at night to feed, generally in large groups away from the reef. Its primary food source is likely crustaceans it finds or attracts with its light organs. Like other anomalopids, the eyelight fish's reproduction is oviparous. Mated pairs spawn near the water's surface. Each female can lay up to around 1,000 eggs per spawning. These eggs go through a brief planktonic phase before attaching to a nearby surface. Within a day, eggs turn milky white and sink to the substrate. Spawning has been documented in the early months of April and May, though it is likely the fish spawns at other times during the year as well.

The symbiotic bacteria in its light organs differ substantially from the bacteria found in other anomalopids. Some bacteria are released from its light organs and remain viable after being discharged, but cease to emit light shortly thereafter. To shut off the light, the eyelight fish uses black lids that slide up to cover the light organs. Use of only a black lid is unique to Photoblepharon; the other members of its family either rotate the organ into a pouch or employ a pouch-and-shutter method.

The eyelight fish has little interaction with humans. Besides being harmless, it spends the day hidden in rock crevices and so is rarely encountered by divers. It has little commercial value, its primary use being as bait for local fisheries, which will cut out the light organs and attach them to hooks. It is listed as Data Deficient by the International Union for the Conservation of Nature due to lack of available population data, a significant contributing factor being its nocturnal nature.

All content from Kiddle encyclopedia articles (including the article images and facts) can be freely used under Attribution-ShareAlike license, unless stated otherwise. Cite this article:
Photoblepharon palpebratum Facts for Kids. Kiddle Encyclopedia.