Kids Encyclopedia Facts
This page is about Pig's ear as food. For pastry shaped like a pig's ear, see Palmier. 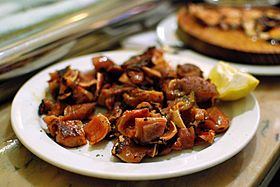 Pig's ear, as food for human consumption, is the cooked ear of pig. It is found in a number of cuisines around the world.

In Bulgaria, pig's ear is used like an appetizer for beer or wine. It is first boiled and then grilled, served with lemon, soy sauce, salt and ground pepper.

In Chinese cuisine, pig's ear is often an appetizer or a side dish, called 豬耳朵 (pinyin: zhū ěr duo, "pig's ear"), often abbreviated to 豬耳 (pinyin: zhū ěr). In some regions, pig's ears are known as 层层脆 (ceng ceng cui, literally "layers of crunch"). It can be first boiled or stewed, and then sliced thin, served with soy sauce or spiced with chili paste. When cooked, the outer texture is gelatinous, akin to tofu, and the center cartilage is crunchy. Pig's ear can be eaten warm or cold.

In Cantonese cuisine, it is another ingredient used in lou mei. The emphasis is on using all edible parts of the pig. Pigs' ears (and lou mei in general) are not considered as delicacies.

In the Philippines, the dish known as Sisig may sometimes use pig ears as part of its ingredients

Pig's ear, known in Lithuania as kiaulės ausis, is served either smoked and cut into thin strips as a beer snack, or boiled whole and served as the main dish with horseradish and fresh vegetables or pickles. 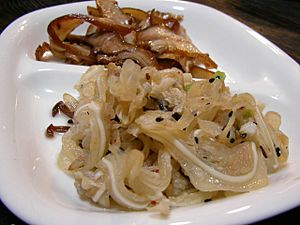 In Okinawan cuisine, the pig's ear is called mimigaa (ミミガー). It is prepared by boiling or pickling and is served with vinegar or in the form of sashimi (sliced raw meat). The entirety of the pig's face is also eaten in Okinawa, where it is known as chiragaa (チラガー).

In Spanish cuisine, pig's ear is served roasted as Oreja de Cerdo, one of the tapas snacks, or boiled in many variants of stew and cocido.

In Portuguese cuisine, pig's ear is served boiled and then roasted, with garlic and fresh coriander as Orelha de Porco de Coentrada. 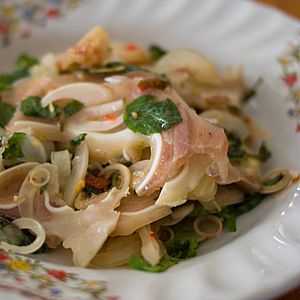 In Thai cuisine, pig's ears are used for many different dishes, amongst others in the northern Thai dish called chin som mok (fermented sliced pigs ears grilled in a banana leaf) and in yam hu mu (a Thai salad made with sliced, boiled pig's ears).

Pigs' ears are a part of the soul food cuisine which originated among African-Americans in the southern United States.

"Pigs' ears" is also a regional colloquial name for a boiled pastry. A dough similar to pie crust is rolled out and then cut into large circles (typically 3-inches in diameter). A sweet fruit filling, or a savoury cheese filling, is placed in the centre. The pastry is folded over and then sealed with the tines of a fork. The "pigs' ears" are boiled until they are done. and eaten while they are warm. They can also be "finished" after boiling by baking, deep frying or pan frying; often with powdered sugar sprinkled over them.

Livermush is a pork product that is common in Western North Carolina prepared using pig livers, pig's ears and snouts, cornmeal and spices.

In Vietnamese cuisine, pig's ear is thinly sliced and mixed with roasted, finely-ground rice flour. It can either be eaten on its own or wrapped with herbs in rice paper, served with Vietnamese dipping sauce.

In some countries, pigs ears are used as dog treats, and are commonly available from pet shops.

All content from Kiddle encyclopedia articles (including the article images and facts) can be freely used under Attribution-ShareAlike license, unless stated otherwise. Cite this article:
Pig's ear (food) Facts for Kids. Kiddle Encyclopedia.