Plummers Island is a 12-acre Potomac River island in Montgomery County, Maryland, about nine miles upriver from Washington, D.C., which is the most scientifically studied island in North America. It is visible from the American Legion Memorial Bridge of the Capital Beltway, just downriver (east) of the bridge. 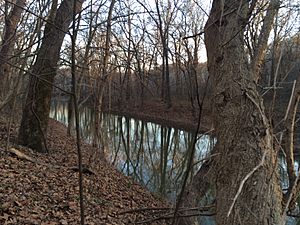 Plummers Island (on the right), from across Rock Run Culvert

Scientific study of Plummers Island began in 1899, when botanist Charles Louis Pollard formed the Washington Biologists' Field Club and began the search for a field camp near the club's Washington, D.C. home. The club leased the island in 1901, and bought it seven years later; the island is now owned by the U.S. National Park Service.

A 2008 issue of the Bulletin of the Biological Society of Washington was dedicated to articles about the flora and fauna of the island. The study of the island's three main plant communities, riparian, terrace, and upland forest, documented 3,012 insect species in 253 families, in 18 orders: Collembola, Odonata, Dermaptera, Blattodea, Phasmatodea, Orthoptera, Psocoptera, Thysanoptera, Hemiptera, Neuroptera, Megaloptera, Coleoptera, Mecoptera, Trichoptera, Lepidoptera, Diptera, Siphonaptera, and Hymenoptera. Another of the studies reported 19 species of freshwater mollusks (7 bivalves, 12 gastropods) in the island's immediate area, bringing the total known for the Middle Potomac River to 42 species. A periodically updated checklist which includes all the vascular plants of the flora, including ferns, fern allies, gymnosperms, and flowering plants, that have ever been reported growing in the wild on the island and its adjacent mainland, totals 885 plant species, of which 704 are native, and 181 naturalized.

In September 2017, Governor Hogan announced plans to widen Interstate Highways I-270 and I-495 (Capital Beltway) with toll-funded express lanes; planned, built, and operated through a public-private partnership (P3). This will also require widening the American Legion Bridge.

On July 10, 2020, the Maryland Department of Transportation (MDOT) released its more than 18,000-page Draft Environmental Impact Statement (DEIS) on the project, which addresses the construction project's impacts on people and the environment. A decision on whether to implement the project is scheduled for 2021, with construction beginning in 2022.

If implemented, it would fragment Plummers Island, which is located immediately downstream of the bridge. It would destroy or require relocation of the channel that separates the island from the mainland, clear-cut trees, and level a significant portion of the island. The native beech forest on the mainland side would also have to be cut down; wetlands between the mainland and the island would be destroyed, which can lead to a heavy infestation with invasive plants.

All content from Kiddle encyclopedia articles (including the article images and facts) can be freely used under Attribution-ShareAlike license, unless stated otherwise. Cite this article:
Plummers Island Facts for Kids. Kiddle Encyclopedia.