Mecoptera (from the Greek: meco- = "long", -ptera = "wings") are an order of insects with about 550 species in nine families worldwide. Mecoptera are sometimes called scorpionflies after their largest family Panorpidae, in which the males have enlarged genitals that look similar to the stinger of a scorpion. The Bittacidae, or hangingflies, are a prominent family of elongate insects known for their elaborate mating rituals, in which females choose mates based on the quality of gift prey offered by various males.

Mecoptera have special importance in the evolution of the insects. Two of the most important insect orders, Lepidoptera (butterflies and moths) and Diptera (true flies), along with Trichoptera (caddisflies), probably evolved from ancestors belonging to, or strictly related to, the Mecoptera. Evidence includes anatomical and biochemical similarities as well as transitional fossils, such as Permotanyderus and Choristotanyderus, which lie between the Mecoptera and Diptera. The group was once much more widespread and diverse than it is now, with four suborders during the Mesozoic.

The Mecoptera and Siphonaptera (fleas) share features such as the production of the rubbery cuticle material resilin and panoistic ovarioles which have germ cells forming a continuous tube in place of the usual nurse cells. The Mecoptera are related to these other insect orders as shown in the cladogram, based on a 2008 analysis of four loci (18S and 28S ribosomal DNA, cytochrome oxidase II, and elongation factor 1-alpha) for 128 flea taxa from around the world. The Boreidae (snow scorpionflies) are seen to be the sister clade to the Siphonaptera, so the Mecoptera as traditionally understood was paraphyletic, though the rest of the order forms a clade.

All the families were formerly treated as part of a single order, Mecoptera. The relationships between the families are, however, a matter of debate. The cladogram, from Cracraft and Donoghue 2004, places the Nannochoristidae as a separate order, with the Boreidae, as the sister group to the Siphonaptera, also as its own order. The Eomeropidae is suggested to be the sister group to the rest of the Mecoptera, with the position of the Bittacidae unclear. Of those other families, the Meropeidae is the most basal, and the relationships of the rest are not completely clear.

Extinct Mecoptera species may have been important pollinators of early gymnosperm seed plants during the late Middle Jurassic to mid–Early Cretaceous periods. These were mainly wind-pollinated plants, but fossil mecopterans had siphon-feeding apparatus that could have fertilized these early gymnosperms by feeding on their nectar and pollen. The lack of iron enrichment in their fossilized probosces rules out their use for drinking blood. Eleven species have been identified from three families, Mesopsychidae, Aneuretopsychidae, and Pseudopolycentropodidae within the clade Aneuretopsychina. Their lengths range from 3 mm (0.12 in) in Parapolycentropus burmiticus to 28 mm (1.1 in) in Lichnomesopsyche gloriae. The proboscis could be as long as 10 mm (0.39 in). It has been suggested that these mecopterans transferred pollen on their mouthparts and head surfaces, as in bee flies and hoverflies today, but no such associated pollen has been found, even when the insects were finely preserved in Eocene Baltic amber. They likely pollinated plants such as Caytoniaceae, Cheirolepidiaceae, and Gnetales, which have ovulate organs that are either poorly suited for wind pollination or have structures that could support long-proboscid fluid feeding. The Aneuretopsychina were the most diverse group of mecopterans in the Latest Permian, taking the place of the Permochoristidae, to the Middle Triassic. During the late Triassic though the Middle Jurassic Aneuretopsychina species were gradually replaced by species from Parachoristidae and Orthophlebiidae, the later of which modern mecopteran families are derived from. 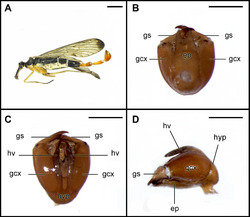 Mecoptera are small to medium-sized insects with long rostrums, membranous wings and slender, elongated bodies. They have relatively simple mouthparts, with a long labium, long mandibles and fleshy palps, which resemble those of the more primitive true flies. Like many other insects, they possess compound eyes on the sides of their heads, and three ocelli on the top. The antennae are filiform and contain multiple segments.

The fore-wings and hind wings are similar in shape, being long and narrow, with numerous cross-veins, and somewhat resembling those of primitive insects such as mayflies. A few genera, however, have reduced wings, or have lost them altogether. The abdomen is cylindrical with eleven segments, the first of which is fused to the metathorax. The cerci consist of one or two segments. The abdomen typically curves upwards in the male, superficially resembling the tail of a scorpion, the tip containing an enlarged structure called the genital bulb.

The caterpillar-like larvae have sclerotinised heads with mandibles, short thoracic legs, prolegs on the first eight abdominal segments and a suction disc or pair of hooks on the terminal tenth segment. The pupae are exarate (the appendages are free rather than being secured within a cocoon).

Mecopterans vary in length from 2 to 35 mm (0.1 to 1.4 in). There are about six hundred known extant species, divided into thirty-four genera in nine families. The majority of the species are contained in the Panorpidae and Bittacidae families. Besides this there are about four hundred known fossil species in about eighty-seven genera, which show a greater degree of diversity than do the living members of the order.

Distribution of mecopterans is worldwide; the greatest diversity at the species level is in the Afrotropic and Palearctic realms, but there is greater diversity at the generic and family level in the Neotropic, Nearctic and Australasian realms. They are absent from Madagascar and many islands and island groups; this may demonstrate that their dispersal ability is low, with Trinidad, Taiwan and Japan, where they are found, having had recent land bridges to the nearest continental land masses. 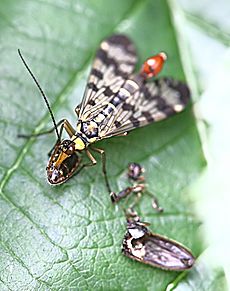 Mecopterans mostly inhabit moist environments although a few species are found in semi-desert habitats. Scorpionflies, family Panorpidae, generally live in broad-leaf woodlands with plentiful damp leaf litter. Snow scorpionflies, family Boreidae, appear in winter and are to be seen on snowfields and on moss; the larvae being able to jump like fleas. Hangingflies, family Bittacidae, occur in forests, grassland and caves with high moisture levels. They mostly breed among mosses, in leaf litter and other moist places, but their reproductive habits have been little studied, and at least one species, Nanochorista philpotti, has aquatic larvae.

Adult mecopterans are mostly scavengers, feeding on decaying vegetation and the soft bodies of dead invertebrates. Panorpa raid spider webs to feed on trapped insects and even the spiders themselves, and hangingflies capture flies and moths with their specially modified legs. Some groups consume pollen, nectar, midge larvae, carrion and moss fragments. Most mecopterans live in moist environments; in hotter climates, the adults may therefore be active and visible only for short periods of the year. 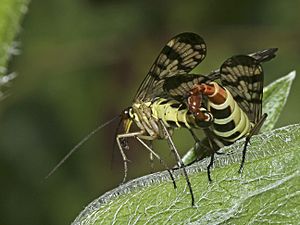 Various courtship behaviours have been observed among mecopterans, with males often emitting pheromones to attract mates. The male may provide a gift such as a dead insect or a brown salivary secretion to the female. Some boreids have hook-like wings which the male uses to pick up and place the female on his back while copulating. Male panorpids vibrate their wings or even stridulate while approaching a female. 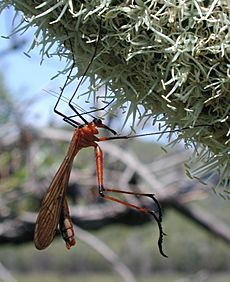 Hangingflies (Bittacidae) provide a nuptial meal in the form of a captured insect prey, such as a caterpillar, bug, or fly. The male attracts a female with a pheromone from vesicles on his abdomen; he retracts these once a female is nearby, and presents her with the prey. While she evaluates the gift, he locates her genitalia with his. If she stays to eat the prey, his genitalia attach to hers, and the female lowers herself into an upside-down hanging position, and eats the prey while mating. Larger prey result in longer mating times. In Hylobittacus apicalis, prey between 3 and 14mm long give between 1 and 17 minutes of mating. Larger males of that species give prey as big as houseflies, earning up to 29 minutes of mating, maximal sperm transfer, more oviposition, and a refractory period during which the female does not mate with other males: all of these increase the number of offspring the male is likely to have.

The female lays the eggs in close contact with moisture, and the eggs typically absorb water and increase in size after deposition. In species that live in hot conditions, the eggs may not hatch for several months, the larvae only emerging when the dry season has finished. More typically, however, they hatch after a relatively short period of time. The larvae are usually quite caterpillar-like, with short, clawed, true legs, and a number of abdominal prolegs. They have sclerotised heads with compound eyes and mandibulate mouthparts. The tenth abdominal segment bears either a suction disc, or, less commonly, a pair of hooks. They generally eat vegetation or scavenge for dead insects, although some predatory larvae are known. The larva crawls into the soil or decaying wood to pupate, and does not spin a cocoon. The pupae are exarate, meaning the limbs are free of the body, and are able to move their mandibles, but are otherwise entirely nonmotile. In drier environments, they may spend several months in diapause, before emerging as adults once the conditions are more suitable. 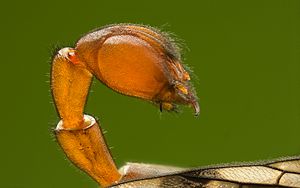 The raised scorpion-like tail of the male has earned the scorpionflies a sinister reputation.

Forensic entomology makes use of scorpionflies' habit of feeding on human corpses. Scorpionflies were the first insects to arrive at a donated human cadaver observed (by the entomologist Natalie Lindgren) at the Southeast Texas Applied Forensic Science Facility near Huntsville, Texas, and remained on the corpse for one and a half days. The presence of scorpionflies thus indicates that a body must be fresh.

Scorpionflies are sometimes described as looking "sinister", particularly from the male's raised "tail" resembling a scorpion's sting. A popular but incorrect belief is that they can sting with their tails.

All content from Kiddle encyclopedia articles (including the article images and facts) can be freely used under Attribution-ShareAlike license, unless stated otherwise. Cite this article:
Mecoptera Facts for Kids. Kiddle Encyclopedia.