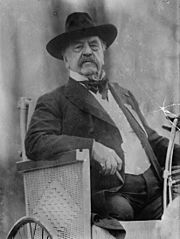 A political general is a term used by historians and most often applies to the American Civil War. In this context, it means a General officer who does not have formal military training or experience and who gained his position through political influence. To a lesser degree, it can also mean generals who engaged in politics during or after their time as a general. A "political general" can seem to be a contradiction in terms in a country such as the United States where by law the military is under civilian authority. An example was Dwight D. Eisenhower, who graduated from the United States Military Academy at West Point in the class of 1915. He was an experienced staff officer who commanded the invasions of North Africa and Western Europe. Eisenhower developed the political skills to deal with his British and American officers as well as political leaders. He later became President of the United States.

In history, many great generals were also political leaders. Julius Caesar was a general who became the dictator of Rome in 44 BC. Genghis Khan was the son of a Mongol chieftain who became a general and then the leader of the Mongol Empire. As a general, Alexander the Great never lost a battle. He was a king who was also a general. In the British Army of the 17th and 18th centuries, the officers were often aristocrats and most obtained their rank by purchase.

In American history up to the Civil war, there had been a long line of amateur military leaders going back to the colonial militias. Before he led the Continental Army in the American Revolutionary War, George Washington had little military experience. Andrew Jackson only had experience in the American Indian Wars. But he successfully defeated a larger and more professional British army at the Battle of New Orleans during the War of 1812.

During the American Civil War, two great armies were raised that were made up largely of citizen-soldiers. There simply were not enough trained generals to lead all these men. Both Abraham Lincoln and Jefferson Davis appointed political generals, some of whom later proved to be incompetent. Others proved to be good or even great generals. Many of these generals had very little or no military training before being commissioned a general. Confederate general Patrick Cleburne was such a leader. He earned his nickname as the "Stonewall Jackson of the West" by being a great general. One of the worst examples was Union general Daniel Sickles. He was a Tammany Hall politician who used his influence to rise to the rank of major general. Sickles nearly lost the Battle of Gettysburg for the North yet, after 34 years of lobbying, managed to get himself awarded the Medal of Honor.

All content from Kiddle encyclopedia articles (including the article images and facts) can be freely used under Attribution-ShareAlike license, unless stated otherwise. Cite this article:
Political general Facts for Kids. Kiddle Encyclopedia.