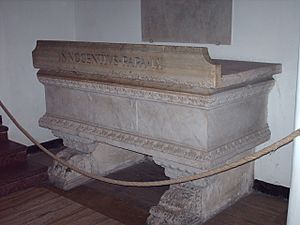 The tomb of Innocent IX

Pope Innocent IX (Latin: Innocentius Nonus; 20 July 1519 – 30 December 1591), born Giovanni Antonio Facchinetti, was an Italian cleric of the Roman Catholic Church and the 231st Pope from 29 October 1591 to his death on 30 December of the same year.

He entered the service of Alessandro Cardinal Farnese, brother of the Duke of Parma and grandson of Pope Paul III. Farnese appointed Fasccinetti as the acting governor of Parma from 1556 to 1558.

In 1560, Facchinetti was named Bishop of Nicastro in Calabria.

In 1562, Facchinetti as present at the Council of Trent.

Pope Pius V sent him as papal nuncio to Venice in 1566.

Faccinetti gave up his bishop's role when he was named Patriarch of Jerusalem in 1572.

Facchinetti was raised to the rank of Cardinal in 1583.

Facchinetti was elected pope in 1591; and he chose to be called Innocent IX. He died two months after his election.

All content from Kiddle encyclopedia articles (including the article images and facts) can be freely used under Attribution-ShareAlike license, unless stated otherwise. Cite this article:
Pope Innocent IX Facts for Kids. Kiddle Encyclopedia.