Port Bonython is the location of a deepwater port, gas fractionation plant and diesel storage facility west of Point Lowly in the Upper Spencer Gulf region of South Australia. It lies 16 km east-northeast of Whyalla, South Australia and approximately 370 km north-west of the State's capital city, Adelaide. The existing wharf is 2.4 kilometres long and is capable of berthing small Capesize ships with a maximum capacity of 110,000 tonnes. The wharf was established in 1982 and named after John Bonython, the founding chairman of Santos. The structure is leased to Santos by the Government of South Australia and is used for the export of hydrocarbon products. An oil spill at Port Bonython in 1992 resulted in loss of bird life and damage to mangrove habitats to the west and southwest of Port Pirie.

A gas fractionation plant operated by Santos Limited was established at Port Bonython in 1982. The plant's refinery and tank farm complex receive crude oil and gas from the Cooper Basin in outback South Australia for processing and distribution. Port Bonython is the terminus of the Moomba to Port Bonython Liquids Pipeline which is 659 km long. From Port Bonython, Santos freights hydrocarbon products by sea to customers across the Asia-Pacific region.

A 2.4 km long wharf was constructed and purchased by the Government of South Australia for $48.2 million in 1983. First shipments from the facility were made that year. It was officially opened on September 5, 1984 by the South Australian Premier John Bannon.

The jetty is licensed to Santos under the Stony Point (Liquids Project) Ratification Act, 1981 and the State Government has an obligation to maintain the jetty for the life of the indenture. In 2010, Cabinet committed $29.9 million to its refurbishment.

A major oil spill occurred at Port Bonython during the berthing of the tanker Era in 1992. Her hull was pierced by a tugboat and approximately 300 tonnes of heavy bunker fuel leaked into Spencer Gulf. The spill response used chemical dispersants including Corexit and the remaining slick resulted in loss of bird life and damage to mangrove habitats and tidal creeks.

As of 2015, Santos Limited remains the only established industrial presence in the immediate vicinity of Port Bonython and Point Lowly. The Port Bonython Fuels project is currently under construction immediately to the north-east. Several development proposals from other companies exist for the area and are at various stages of Government approval, and a number of other proposals have been announced then subsequently abandoned.

Port Bonython is the chosen site of a future mineral export precinct, facilitated by the South Australian State Government. As at October 2013, the precinct is likely to consist of an iron ore export facility, a fuel distribution hub and a desalination plant. Water produced by the proposed desalination plant would be piped overland, 300 km north to the Olympic Dam mine for the exclusive use of BHP Billiton.

Prospective miners with iron ore deposits in the State's far north, including the Woomera Protected Area are the most likely to utilize the facility. WPG Resources is one such company. BHP Billiton has also expressed interest in considering Port Bonython for the potential future export of copper concentrates to China, should the Olympic Dam mine expand to an open cut operation.

As of June 2015 decision regarding Federal environmental approval for the facility is expected by 1 February 2016. 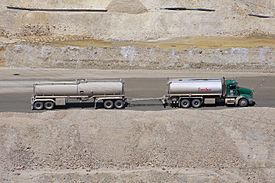 Fuel tankers will be filled at Port Bonython Fuels once constructed.

A fuel distribution hub and micro-refinery project known as Port Bonython Fuels was initially proposed by Scott's Transport and Stuart Petroleum in 2007. The two stage development was designed to provide a billion litres of diesel per year by road freight to mining companies around South Australia. The project's terrestrial footprint is comparable to that of the existing Santos facility. The project proposes to service tanker trucks of various classification, the largest being A-Triple size. The facility will increase shipping traffic to the existing Port Bonython wharf, where it will receive imported liquid hydrocarbons.

The project was deemed to be public infrastructure and awarded 'Crown-sponsored Status' by the South Australian Government. The development application was approved by the Development Assessment Commission and the Minister for Planning Paul Holloway in 2010. The project documentation is not publicly available.

In 2014, it was announced that Port Bonython Fuels was expected to commence construction in 2015. Opposition to the development has called for the proposed facility's relocation 20 km west, adjacent to the Lincoln Highway.

Resource company BHP Billiton proposed to construct a reverse-osmosis seawater desalination plant at Port Bonython to provide water for the expansion of the Olympic Dam copper and uranium mine. The plant was approved by both State and Federal Governments in October, 2011. The plant has an approved capacity of up to 280 megalitres of produced water per day. At full capacity, this would result in 370 megalitres of waste brine with elevated salinity returned to the sea off Point Lowly. During their research for the preparation of the Olympic Dam Expansion Draft Environmental impact Statement, BHP's contract scientists discovered that the region's population of Giant Australian Cuttlefish was genetically distinct and that it was vulnerable to increased salinity and changes in pH, particularly during embryo development.

If constructed, the plant will be the second largest in Australia after the Victorian Desalination Plant.

Parties expressing concern about the potential impact of the plant on salinity within Spencer Gulf have included prawn fishermen, tuna growers, scientists and environmentalists.

As of December 2014, construction of the proposed desalination plant at Port Bonython is yet to commence.

An LNG processing plant was proposed by Beach Energy and their Japanese partners Itochu Corporation in 2010, but was subsequently abandoned. In 2011, a plan to develop a Technical Ammonium Nitrate (TAN) plant was proposed by Deepak Fertilizers and was abandoned the following year owing partly to the location. The TAN plant proposal prompted accusations of State government deception, made by the community action group, Save Point Lowly.

As of November 1, 2013, the following projects' approval and development status are: 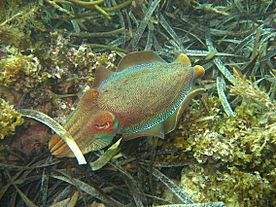 Waters adjacent to Port Bonython fall within the Upper Spencer Gulf Marine Park's outer boundary. A sanctuary zone has been created for the protection of the Giant Australian Cuttlefish. It covers a section of inshore breeding habitat immediately to the west of the proposed Port Bonython Bulk Commodities Export Facility. An additional sanctuary zone exists at Fairway Bank, south of Port Bonython. It is located on the western side of the narrow shipping channel and may be subjected to impacts from moving Capesize vessels with limited under-keel clearance.

Shipping movements within the marine park are predicted to increase from approximately 360 per year to over 1000 by the year 2020. Figures for shipping movements do not include barge movements for transshipping activities. 32 barge movements are required to fill a single Panamax bulk carrier with iron ore. BHP Billiton also intends to transport heavy equipment by barge to a future landing facility north of Fitzgerald Bay, in the northern reaches of the Upper Spencer Gulf Marine Park.

Port Bonython Road provides the only access to the Port Bonython area. It is currently a shared use public road which provides access to the Australian Army's Cultana Training Area, Point Lowly lighthouse, beaches, boat ramp and numerous coastal homes and camp sites. It also provides access for divers and tourists who visit in May through September to view or swim with the Giant Australian Cuttlefish during their annual inshore breeding aggregation. A coastal road to the north exists, but it is controlled by the Australian Army and is permanently closed to the public. In 2016 a partnership between the state government and Port Bonython Fuels enabled the construction of a new road connecting Port Bonython Road with the popular cuttlefish tourism site at Stony Point.

The Whyalla railway line connecting Whyalla to Port Augusta is standard gauge. The national standard gauge system extends from Port Augusta to Darwin, Perth, Adelaide and other regional towns. The separate and isolated BHP Whyalla Tramway narrow gauge railway connects Whyalla to Iron Knob and extends to Iron Duke and other iron ore mines of the Middleback Range. It is privately operated for the exclusive use of Arrium. Railways to Whyalla were originally built for BHP. A new rail link connecting Port Bonython to the Whyalla standard gauge line is a component of the Port Bonython Bulk Commodities Export Facility proposal.

A dual gauge balloon loop was constructed at Whyalla to increase iron ore export capacity at the existing port there.

All content from Kiddle encyclopedia articles (including the article images and facts) can be freely used under Attribution-ShareAlike license, unless stated otherwise. Cite this article:
Port Bonython Facts for Kids. Kiddle Encyclopedia.