Prattsville is a town in Greene County, New York, United States. The town is in the northwest part of the county. As of the 2010 census, the population was 700. 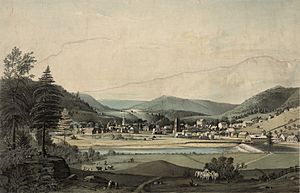 An 1844 lithograph of the town 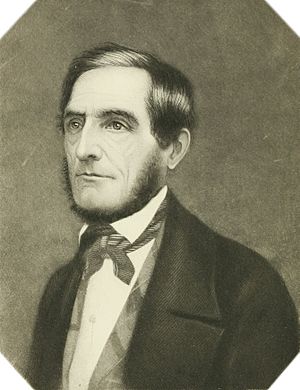 Zadock Pratt is credited with raising the town to prominence in the 1800s, and the town was subsequently named after him.

The area of the town was first settled around 1763, and the region was then called "Schoharie Kill". An attempt during the American Revolution by the British and their Loyalist allies to drive the settlers out was thwarted when they were defeated by the settlers.

Prattsville was established in 1824 from the town of Windham. Some of the town was lost to form the town of Ashland in 1848.

Prattsville was later named after Zadock Pratt, a congressman and prominent citizen. Pratt built a tannery larger than any other in the world at the time, helping it become a major town in upstate New York. His life is depicted through as series of stone carvings called Pratt Rock which he commissioned during his lifetime.

The 1830 population of the town was 830. When Pratt built his tannery, it created a vast number of jobs, and the population grew to 1,989 by 1850. However, by 1845 all of the hemlock bark had been extracted from the forests for 10 miles (16 km) around, and Pratt was forced to close the tannery. The jobs that were lost could not be replaced, and the town's population dwindled to 1,314 by 1875. The Old Episcopal Manse was added to the National Register of Historic Places in 2000, and the John and Martinus Laraway Inn was added in 2012.

On August 28, 2011, Hurricane Irene caused record flooding in the town by Schoharie Creek, causing major damage and destroying large areas of the town. Every structure on the strip that comprises Main Street was partly or fully destroyed, including all 22 of the town's businesses. Eleven houses collapsed in the flood, fifteen were condemned and torn down, and more than 100 homes were so damaged that the residents couldn't return to them, but amazingly there were zero fatalities. It received widespread national news coverage because the town had nearly been washed away. Gov. Andrew M. Cuomo labeled Prattsville as the place in New York State hardest hit by Tropical Storm Irene.

Schoharie Creek, a tributary of the Mohawk River, flows northward through the town past the hamlet of Prattsville.

There were 253 households out of which 36.4% had children under the age of 18 living with them, 56.9% were married couples living together, 9.9% had a female householder with no husband present, and 27.7% were non-families. 22.1% of all households were made up of individuals and 13.0% had someone living alone who was 65 years of age or older. The average household size was 2.61 and the average family size was 3.04.

Communities and locations in Prattsville

All content from Kiddle encyclopedia articles (including the article images and facts) can be freely used under Attribution-ShareAlike license, unless stated otherwise. Cite this article:
Prattsville (town), New York Facts for Kids. Kiddle Encyclopedia.