Kids Encyclopedia Facts
Not to be confused with Prestonville, Kentucky.

Prestonsburg is a home rule-class city in and the county seat of Floyd County, Kentucky, United States. The population was 3,255 at the time of the 2010 census, down from 3,612 at the 2000 census.

The area was part of the 100,000-acre (400 km2) grant to the family of Col. John Preston's wife, which he administered on her behalf. The grant was intended to permit British colonization beyond the Blue Ridge Mountains, but subsequent French and Indian resistance and a reversal of British policy limited its impact. The land was not settled until John Spurlock of Montgomery County, Virginia, arrived in 1791. He laid out the town of "Preston's Station" in 1797. It became the seat of Floyd County upon its formation in 1799 and was formally established in 1818. The post office was known as "Floyd Court House" from its establishment in 1816 until the late 1820s, when it was renamed "Prestonsburg".

On January 10, 1862, nearby Middle Creek was the scene of the largest battle of the Civil War to occur in eastern Kentucky. The town was also the site of one of the worst school bus disasters in American history on February 28, 1958. 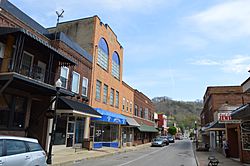 Prestonsburg is mentioned in Dwight Yoakam's "Readin', Rightin', Rt. 23" (from his album Hillbilly Deluxe), a song about the yearning of local coal miners to escape their plight by traveling up U.S. Route 23 to find employment in the factories in the North, not knowing that they were only trading one miserable life for another.

Prestonsburg is the location of the Mountain Arts Center, which hosts music concerts and is home to the Kentucky Opry. Middle Creek National Battlefield is the site of the largest and most significant Civil War battle in Eastern Kentucky.

Prestonsburg is home to the Samuel May House Living History Museum. It is the oldest known brick home remaining in the Big Sandy Valley. Built by Samuel May in 1817, the house was utilized by the Confederate forces as a recruiting station during the American Civil War. The 5th Kentucky Infantry CSA and 10th Kentucky Cavalry was organized at this location. The house was being used as a residence until 1981 and was donated to the City of Prestonsburg in 1992. The Samuel May House has since been restored and maintained as a living history museum.

The Jenny Wiley Theatre is located in Prestonsburg and offers theatrical productions all year long at both the outdoor Jenny Wiley Amphitheater, located within the Jenny Wiley State Resort Park, and the nearby Mountain Arts Center. The Theatre's presentations of classic Broadway musicals, comedies, historical dramas and holiday productions have kept theatre-goers entertained for the past 40 years.

Prestonsburg is also the home of the East Kentucky Science Center. Opened in 2004, the Science Center contains one of the most technologically advanced planetariums in the United States.

There were 1,563 households out of which 26.4% had children under the age of 18 living with them, 43.4% were married couples living together, 14.5% had a female householder with no husband present, and 38.8% were non-families. 37.0% of all households were made up of individuals and 17.0% had someone living alone who was 65 years of age or older. The average household size was 2.09 and the average family size was 2.72.

All content from Kiddle encyclopedia articles (including the article images and facts) can be freely used under Attribution-ShareAlike license, unless stated otherwise. Cite this article:
Prestonsburg, Kentucky Facts for Kids. Kiddle Encyclopedia.