Prince George of Cambridge (George Alexander Louis; born 22 July 2013) is a member of the British royal family. He is the eldest child and elder son of Prince William, Duke of Cambridge, and Catherine, Duchess of Cambridge, and third in the line of succession to the British throne behind his paternal grandfather (Charles, Prince of Wales) and his father. As he is expected to someday be king, his birth was widely celebrated across the Commonwealth realms. He has two younger siblings: Princess Charlotte of Cambridge and Prince Louis of Cambridge. George occasionally accompanies his parents on royal tours, and has affected business and popular culture. 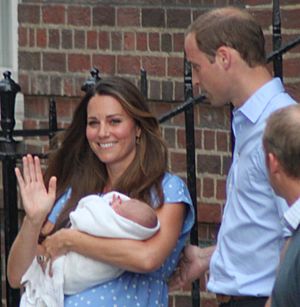 On 3 December 2012, Clarence House announced that Prince William, Duke of Cambridge, and Catherine, Duchess of Cambridge, were expecting their first child. The Duke is the elder son of Charles, Prince of Wales, who is the eldest son of Queen Elizabeth II, meaning that the child would be third in the line of succession to the British throne. Speculation ensued that the birth would boost the British national economy and provide a focus for national pride. Commemorative coins were issued by the Royal Mint, Royal Canadian Mint, and Royal Australian Mint; the first time a royal birth had been marked that way.

Prince George was born in Lindo Wing of St Mary's Hospital, London, at 16:24 BST (15:24 UTC) on 22 July 2013. The customary formal bulletin announcing the royal birth was displayed on an easel outside Buckingham Palace, although in a break with tradition the news was first conveyed in a press release from palace officials. The newborn was widely hailed as a future king. 21-gun salutes signalled the birth in the capitals of Bermuda, the UK, New Zealand, and Canada; the bells of Westminster Abbey and many other churches were rung; and iconic landmarks in the Commonwealth realms were illuminated in various colours, mostly blue to signify the birth of a boy. The Duchess of Cambridge and her baby, accompanied by the Duke, left hospital on 23 July, and the baby's name was announced as George Alexander Louis the following day.

Prince George was baptised by the Archbishop of Canterbury in the Chapel Royal at St James's Palace on 23 October 2013, with Oliver Baker, Emilia Jardine-Paterson, Earl Grosvenor, Jamie Lowther-Pinkerton, the Hon. Julia Samuel, William van Cutsem and Zara Tindall serving as godparents. The ceremony used a font that was made for Queen Victoria's first child and water from the River Jordan. The Royal Mint issued a set of commemorative coins to celebrate the christening, the first coins to mark a royal christening in Britain. 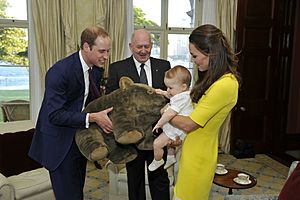 Prince George receives a gift from the Governor-General of Australia, Sir Peter Cosgrove, in April 2014

Prince George embarked on his first royal tour with his parents in April 2014, during which the Cambridges spent three weeks in New Zealand and Australia. Although he only appeared twice, the BBC described the "nine-month-old future king" as "the star of the show". Prime Minister of Australia Tony Abbott predicted in Parliament House, Canberra, that George would one day be welcomed there as King of Australia. In June, Prince George made his first public appearance on the balcony of Buckingham Palace following the Trooping the Colour parade marking the Queen's Official Birthday.

George's parents are adamant that he should grow up as privately as possible. He and his younger siblings, Princess Charlotte and Prince Louis, are consequently rarely seen in public, including royal tours. In August 2015, Kensington Palace stated that they wanted all global media to stop taking unauthorised photographs of George, as they believed "a line has been crossed" in paparazzi methods of locating and photographing him. 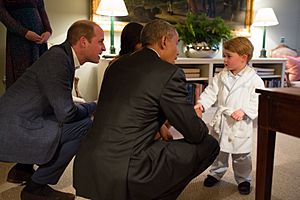 On 22 April 2016, Prince George met Barack Obama, President of the United States. He was photographed with a rocking horse that Obama had given him when he was born. The encounter later prompted Obama to joke that "Prince George showed up to our meeting in his bathrobe... a clear breach of protocol." Prince George and Princess Charlotte accompanied their parents to Canada, and on a diplomatic visit to Poland and Germany in July 2017.

In January 2016, George started his education at the Westacre Montessori School Nursery, near his family home at Anmer Hall in Norfolk. He attended his first day of primary school on 7 September 2017 at the private Thomas's School in Battersea. At school he is known as George Cambridge.

The "Prince George effect", also known as the "royal baby effect", is that clothing and products identified as used by George tend to sell better than before. The effect was noted during his April 2014 tour of New Zealand and Australia and many businesses have attempted to use this effect to their advantage. He was ranked No. 49 on GQ's "50 Best Dressed Men in Britain" list in 2015. In 2016, the dressing gown he wore while meeting President Obama sold out after he was seen wearing it. In September 2017 the news that the Prince's school had served a Le Puy green lentil dish resulted in a spike in the legume's sales.

Prince George's official title and style is "His Royal Highness Prince George of Cambridge". While his name was announced two days after his birth, he was, from birth, a British prince entitled to the style of Royal Highness under letters patent issued by King George V in 1917, which gave the title and style to the eldest son of the Prince of Wales's eldest son. As with other princes and princesses who are born to royal dukes, George's territorial designation is taken from his father's title, in this case "Cambridge", from the Dukedom of Cambridge.

All content from Kiddle encyclopedia articles (including the article images and facts) can be freely used under Attribution-ShareAlike license, unless stated otherwise. Cite this article:
Prince George of Cambridge Facts for Kids. Kiddle Encyclopedia.