Prosimians are a group of primates that includes all living and extinct strepsirrhines (lemurs, lorisoids, and adapiforms), as well as the haplorhine tarsiers and their extinct relatives, the omomyiforms, i.e. all primates excluding the simians. They are considered to have characteristics that are more "primitive" (ancestral or plesiomorphic) than those of simians (monkeys, apes, and humans).

Simians emerged within the Prosimians as sister group of the haplorhine tarsiers, and therefore cladistically belong to this group. However, simians are traditionally excluded, rendering prosimians paraphyletic. Consequently, the term "prosimian" is no longer widely used in a taxonomic sense, but is still used to illustrate the behavioral ecology of tarsiers relative to the other primates.

Prosimians are the only primates native to Madagascar, but are also found throughout Africa and in Asia. 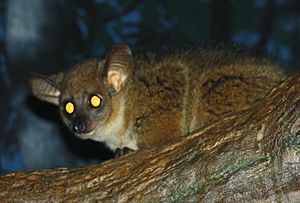 The tapetum lucidum of a galago, typical of prosimians, reflects the light of the photographer's flash.

Being an evolutionary grade rather than a clade, the prosimians are united by being primates with traits otherwise found in non-primate mammals. Their diets typically are less dominated by fruit than those of the simians, and many are active arboreal predators, hunting for insects and other small animals in the trees. All prosimians outside Madagascar are nocturnal, meaning that no prosimian competes directly with simian primates (the only nocturnal simians are New World monkeys of genus Aotus).

Related to their frequently nocturnal lifestyle, prosimians lack the colour vision of higher primates. Like most placental mammals, they are in effect red–green colour blind. This allows for more rod cells in the retina, which may enhance vision under low-light conditions. Except in tarsiers, the nocturnal vision is further augmented by a reflective tapetum lucidum behind the retina, similar to that found in other nocturnal mammals. This layer reflects the light that passes through the retina, increasing the photoreceptors exposure to the light. It is however not well developed in diurnal forms like many lemurs.

All prosimians possess two laterally flattened toilet claws, used for grooming. These can be found on the second toe in lemurs and lorises, and the second and third in tarsiers. Aye-ayes have functional claws on all other digits except the hallux, including a toilet claw on the second toe. Clawlike nails are however also found in the small-bodied callitrichids, a group of New World monkeys, though none of them have a toilet claw.

The prosimians have retained the primitive mammalian condition of a bicornuate uterus, with two separate uterus chambers. In the simians, the uterus chambers have fused, an otherwise rare condition among mammals. Prosimians usually have litters rather than single offspring, which is the norm in higher primates.

While primates are often thought of as fairly intelligent animals, the prosimians are not very large-brained compared to other placental mammals. Their brain-cases are markedly smaller than those of simians of comparable sizes. In the large-eyed tarsiers, the weight of the brain is about the same as that of a single eye. Prosimians generally show lower cognitive ability and live in simpler social settings than the simians. The prosimians with the most complex social systems are the diurnal lemurs, which may live in social groups of 20 individuals. The nocturnal prosimians are mainly solitary.

All content from Kiddle encyclopedia articles (including the article images and facts) can be freely used under Attribution-ShareAlike license, unless stated otherwise. Cite this article:
Prosimian Facts for Kids. Kiddle Encyclopedia.