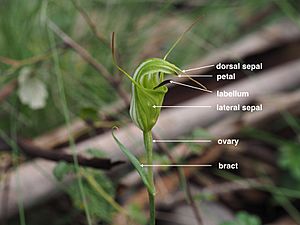 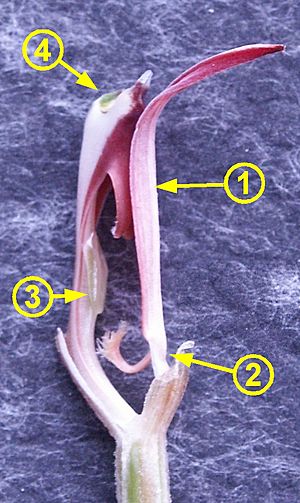 Pterostylis is a genus of about 300 species of plants in the orchid family, Orchidaceae. Commonly called greenhood orchids, they are terrestrial, deciduous, perennial, tuberous, herbs found in Australia, New Zealand, New Guinea, New Caledonia and one Indonesian island. The flowers are mostly green, sometimes with brown, reddish or white stripes, and are distinguished from other orchids by their unusual flower structures and pollination mechanism.

Greenhood orchids are all terrestrial herbs with an underground tuber like many other genera of orchids but are distinguished by a hood-like "galea" formed by the fusing of the dorsal sepal and two lateral petals. The galea curves forward, covers the sexual parts of the flower, is important in the pollination process and is about as long as the two petals. The dorsal sepal is translucent white with green, reddish or brown stripes. The two lateral sepals are joined at their base, form the front of the flower and usually protrude to form "points" or "ears" which extend above or to the side of the galea. The third (medial) petal forms the highly modified labellum. As in other orchids, the sexual parts of the flower form part of the column and in all greenhoods, this structure has a pair of mostly translucent wings and is also important in pollination.

The tuber of a greenhood is usually more or less spherical in shape and lasts for about a year then dies. A new one is produced early in the life of the parent tuber at the same time as a new shoot is produced and continues to grow, reaching maturity at the end of the growing season. In some species, a larger number of "daughter" tubers grow, and a colony of orchids is produced. The leaves are either attached in a rosette to the base of the peduncle or "stalk" of the plant by a short petiole, or further up it, in which case the leaves are sessile. There may be one or several flowers on the peduncle.

The fruit of a greenhood is a dehiscent capsule containing up to 500 tiny seeds and is oblong to elliptic in shape with three ridges. Other parts of the flower wither soon after pollination and the dry remains are attached to the end of the capsule.

The first observation of Pterostylis by European botanists was probably by Joseph Banks when HMS Endeavour visited Botany Bay in 1770 but any specimens collected were lost later in the voyage. The first formal description of a greenhood was by Jacques Labillardière who collected a specimen from Bruny Island and gave it the name Disperis alata. After several name changes, Disperis alata is now known as Pterostylis alata. John White, the first surgeon-general of the colony of New South Wales collected several species and George Caley collected 208 greenhood specimens from 16 species and described them in great detail, including details of their habitat and gave them names like Druids Cap patersoni but did not publish his work.

The genus Pterostylis was first raised by Robert Brown who formally described 19 species but did not nominate a type species. The species he described were collected from the east coast of the mainland and from Tasmania and the descriptions were published in Prodromus Florae Novae Hollandiae.

Alan Cunningham was the first to describe a New Zealand species, P. banksii and John Lindley described the first four Western Australian species, P. vittata, P. pyramidalis, P. barbata and P. scabra from specimens collected by James Drummond. About 300 species are recognised and about 200 of them have been formally described and named.

In 2001 the genus Pterostylis was split such that two new genera, Plumatichilos and Oligochaetochilus, were established based on morphological characters. These divisions effectively separated species with a thread-like, feathery labellum (Plumatichilos), and those with downward-curved lateral sepals (Oligochaetochilus) from the remaining Pterostylis species. The following year, David Jones and Mark Clements proposed further separating Pterostylis into sixteen genera based on a combination of molecular and morphological characters: the genera Bunochilus, Crangonorchis, Diplodium, Eremorchis, Hymenochilus, Linguella, Oligochaetochilus, Petrorchis, Pharochilum, Plumatichilos, Ranorchis, Speculantha, Stamnorchis, Taurantha and Urochilus. These changes were not adopted widely by Australian herbaria as the data appeared to support a monophyletic group. In 2010, further molecular work reinstated Pterostylis as a monophyletic group with two subgenera distinguishing species with lateral sepals that are bent sharply downwards ("deflexed") from those with the lateral sepals bent backwards ("recurved").

The genus name (Pterostylis) is derived from the Greek words pteron meaning 'wing' and stylos meaning 'pillar' or 'post', but in orchids, generally applies to the column.

The clostest relative of Pterostylis is Achlydosa, restricted to New Caledonia and the sole other genus of subtribe Pterostylidinae.

Orchids in the genus Pterostylis occur mostly in Australia but are also found in New Zealand, including some of its smaller islands such as Chatham Island, and in New Caledonia, New Guinea, New Britain, New Ireland and on Seram Island in Indonesia. In Australia they are found in all states and Lord Howe Island, but not in the Northern Territory. They grow in a wide range of habitats, especially in temperate zones and are found in grassland, heath, scrub, woodland and forest, including rainforest. They sometimes grow in semi-arid areas but usually near rocks or crevices where there is run-off during rain. In tropical regions they tend to grow at higher altitudes where temperatures are lower. Most have periods of dormancy which coincide with climatic extremes, surviving as small tubers until favourable conditions return.

Most greenhoods are pollinated by insects, nearly always by tiny flies from the family Mycetophilidae or by mosquitoes (Family Culicidae). The insect approaches the flower from downwind, as if attracted by a scent and usually lands on the galea. (In the case of Pterostylis sanguinea, the pollinator is a male fungus gnat of the genus Mycomya which attempts to copulate with the labellum, which produces the chemical attractant.) The insect then enters the flower and either because it has passed a balance point, or because it has touched a sensitive part of the labellum, the labellum moves forward trapping the insect between the column wings, the labellum and other flower parts. Observation of the insect's reaction to entrapment is difficult to observe, but in its struggle to escape, it either deposits pollinia from a previously visited flower or contacts the sticky viscidium and pollinia are attached, then carried to another flower. The features of an actively-moving labellum, along with the galea, are unique to these orchids.

Greenhoods are easily grown in pots and usually flower well, filling the pot in a few years. Pterostylis curta and P. nutans can be grown in commercial orchid potting mix with coarse gravel added. A bushhouse or cool glasshouse are needed for some species. Greenhoods need regular watering in the growing seaseon but must be kept dry when dormant.

The following is a list of some of the undescribed species of Pterostylis:

All content from Kiddle encyclopedia articles (including the article images and facts) can be freely used under Attribution-ShareAlike license, unless stated otherwise. Cite this article:
Pterostylis Facts for Kids. Kiddle Encyclopedia.