Rüppell's fox (Vulpes rueppellii), also spelled Rueppell's fox, is a species of fox living in North Africa, the Middle East, and southwestern Asia. It is named after the German naturalist Eduard Rüppell. This fox is also called the "sand fox", but this terminology is confusing because the corsac fox (V. corsac) and the Tibetan sand fox (V. ferrilata) are also known as "sand foxes". 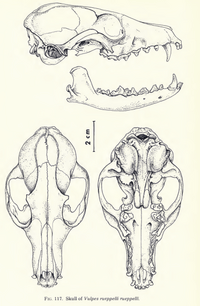 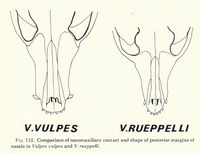 Rüppell's fox is a small fox, measuring 66 to 74 cm (26 to 29 in) in total length, including a tail measuring 27–30 cm (11–12 in) long. Males appear somewhat larger than females, but both sexes are reported to have an average weight of 3.6 kg (7.9 lb). The coat is sandy in color, ticked with numerous white hairs, and fading from reddish along the middle of the back to pure white on the animal's underparts and on the tip of its tail. The head has a more rusty tone on the muzzle and forehead, with dark brown patches on the sides of the muzzle, stretching up towards the eyes. The chin and the sides of the face are white. The whiskers are long, reaching 7 cm (2.8 in), and the tail is bushy.

Rüppell's fox has fur on the pads on its feet, that possibly helps distribute its weight and move easily on sand, and keeps the hot sand from burning its feet. Similar to other desert-dwelling foxes, Rüppell's fox has large ears to cool it off. Although adults are too large to confuse with fennec foxes, which live in the same area, young Rüppell's foxes can be confused with adults of that species. The larger ears, however, make them easy to distinguish from red and pale foxes, which also live in some the same areas. In addition, the coat of a Rüppell's fox is much paler than that of a red fox, while pale foxes lack the white tips on their tails.

Rüppell's fox is found across North Africa south of the Atlas Mountains, from Mauritania and Morocco in the west to Egypt and Djibouti in the east. It is also found in the Arabian Peninsula southwards from Syria, Palestine, Jordan and Iraq, and as far east as Iran, Pakistan, and Afghanistan. Within this region, it prefers sandy or rocky deserts, but may also be found in semiarid steppes and sparse scrub.

Rüppell's foxes are monogamous and either crepuscular or nocturnal, sheltering during the day in dens. Outside of the breeding season, these are small dens that can hold only one adult fox, and the animal typically changes dens every five days or so. Breeding dens are larger, and occupied by a pair of adults and their kits. Such dens can sometimes have more than one entrance, although this is unusual. Most dens are dug under rocks or trees.

Rüppell's foxes occupy distinct territories, which they mark with urine, but not with dung as red foxes do. The territories of the members of a mated pair overlap almost completely, but are entirely separate from those of any neighboring pairs. These territories are maintained throughout the year, although the pair occupy separate dens outside of the mating season. The size of the territories varies with the local terrain, but has been reported as around 70 km2 (27 sq mi) in Oman, with those of males being larger, on average, than those of females. The foxes range widely during their nocturnal foraging, travelling over 9 km (5.6 mi) in a night.

Rüppell's fox was pushed to living in the desert biome due to competition with its larger relative, the red fox. Its only natural predators are the steppe eagle and the eagle-owl.

Rüppell's foxes are omnivores, with a diet that varies considerably depending on what is locally available. In some regions, they are reported to be mainly insectivorous, especially feeding on beetles and orthopterans, while in others, small mammals, lizards, and birds form a larger part of their diet. Plants eaten include grasses and desert succulents, along with fruits such as dates, and they have also been known to scavenge from human garbage.

The female prepares her breeding den. Litters up to six kits, although more usually just two or three, are born after a gestation period around 52–53 days. The young are born blind, and are weaned at 6–8 weeks of age. They reach independence at about four months, when they may travel up to 48 km (30 mi) in search of a suitable territory. They can live an average of seven years in the wild, but have been reported to live up to 12 years in captivity.

For the past 100 years, Rüppell's foxes have been treated like a pest. They prey on many livestock animals in Arabia, including chickens, lambs, and young goats.

All content from Kiddle encyclopedia articles (including the article images and facts) can be freely used under Attribution-ShareAlike license, unless stated otherwise. Cite this article:
Rüppell's fox Facts for Kids. Kiddle Encyclopedia.