Ravenna is a home rule-class city in Estill County, Kentucky, United States. The population was 605 at the 2010 census.

Before it was incorporated, Ravenna was known only as "The Village".

The Louisville & Nashville Railroad was responsible for the name of Ravenna, the building of the shops, yard, office building, passenger and freight station, and many other things that were built for the establishment of a railroad terminal in Estill County just east of the county seat, Irvine. After the completion of the terminal in 1915, the county decided it would call it "Ravenna", which stems from the word "ravine". It was reported by early railroad officials that an Italian foreman and interpreter, with a construction crew of approximately 60 Italian men building the railroad yards, requested that the railroad officials name the station in honor of his birthplace, Ravenna, Italy, and it was so granted by the railroad officials in charge of such matter.

A thriving village sprang up in 1915, when the railroad started construction of its shops; and five years later in 1920, Ravenna was incorporated as a 6th-class City by the Estill County Circuit Court.

In 1924 Ravenna was declared a 5th-class city by an act of the Kentucky State Legislature due to an increase in population. This also entitled them to have a mayor, six councilmen and city clerk, and fire and police departments. By this time in its history, Ravenna had become an almost entirely white city. In 1920, hundreds of "black railroad workers were forced to leave their jobs and their community(14)." {George C. Wright, A History of Blacks in Kentucky, Volume 2.} Ravenna is home of the local VFW Post #8019; a National Guard armory that is home to C Company, 1-149th Infantry (M), 149th BDE; and the Estill County Veterans Memorial in Ravenna's Veterans Memorial Park. 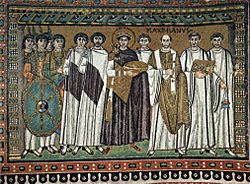 Original from which the Ravenna Tile was copied

In order to express sympathy following the tornado disaster of June 9, 1961, the Italian city of Ravenna donated a design on a glazed tile to Ravenna, Kentucky. A copy of a Late Antique mosaic from the Basilica of San Vitale, the tile depicts Roman Emperor Justinian I with Maximianus, Bishop of Ravenna. The tile is displayed at the city hall.

According to the United States Census Bureau, Ravenna has a total area of 0.3 square miles (0.8 km2), all of it land.

The climate in this area is characterized by hot, humid summers and generally mild to cool winters. According to the Köppen Climate Classification system, Ravenna has a humid subtropical climate, abbreviated "Cfa" on climate maps.

There were 301 households, out of which 25.9% had children under the age of 18 living with them, 50.8% were married couples living together, 15.3% had a female householder with no husband present, and 31.2% were non-families. 29.6% of all households were made up of individuals, and 16.6% had someone living alone who was 65 years of age or older. The average household size was 2.30 and the average family size was 2.80.

All content from Kiddle encyclopedia articles (including the article images and facts) can be freely used under Attribution-ShareAlike license, unless stated otherwise. Cite this article:
Ravenna, Kentucky Facts for Kids. Kiddle Encyclopedia.