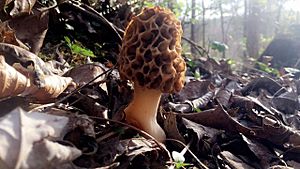 Morel Mushrooms are commonly found in Estill County in the spring, with Irvine's Mountain Mushroom Festilval being dedicated to them.

Estill County is a county located in the U.S. state of Kentucky. As of the 2010 census, the population was 14,672. Its county seat is Irvine The county was formed in 1808 and named for Captain James Estill, a Kentucky militia officer who was killed in the Battle of Little Mountain during the American Revolutionary War. Estill County is a moist county meaning that the county seat, the city of Irvine, allows the sale of alcohol after the October 9, 2013 vote, but not the rest of Estill County outside the Irvine city limits. Estill County has two adjacent towns, known as the twin cities, Irvine and Ravenna. Both cities sit along the Kentucky River in the central part of the county. Ravenna is home to a former CSX Transportation facility, now owned by Kentucky Steam Heritage Corporation for the restoration of Chesapeake and Ohio 2716. It conducts the Ravenna Railroad Festival annually in late summer, and the historic Fitchburg & Cottage Furnaces are located here. Irvine is home to the manufacturing headquarters of Carhartt, Inc and hosts the annual Mountain Mushroom Festival over the last weekend of April, which celebrates the abundant Morel Mushrooms found in the region. Additionally, Estill County is currently the home of musician Tyler Childers and his wife Senora May Childers.

Estill County was formed in 1808 from land given by Clark and Madison counties. A courthouse built in 1941 replaced a structure dating from the 1860s.

All content from Kiddle encyclopedia articles (including the article images and facts) can be freely used under Attribution-ShareAlike license, unless stated otherwise. Cite this article:
Estill County, Kentucky Facts for Kids. Kiddle Encyclopedia.