Reading is a city in Lyon County, Kansas, United States. As of the 2010 census, the city population was 231. 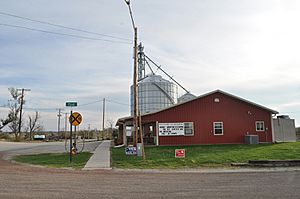 For millennia, the land that is currently Kansas was inhabited by Native Americans. In 1803, the United States secured most of modern Kansas as part of the Louisiana Purchase. In 1854, Congress organized the Kansas Territory and in 1861, Kansas became the 34th state.

In 1863, by Act of Congress and similarly by an act of the State of Kansas, the Atchison, Topeka and Santa Fe Railway was granted 3,000,000 acres of Kansas land on the condition that it would build a continuous line to the western border of Kansas by March 1, 1873. On Oct. 30, 1868, construction began at Topeka. By Sept. 14, 1870, the first Santa Fe train reached Emporia, fifteen miles past the present site of Reading. James Fagan, agent for the railroad lands, and T. J. Peter and M. S. Sargent, who represented the railroad interest, organized a town company, with James Fagan as president. The land was owned by McMann & Co., of Reading, Pennsylvania. The town was platted on sixty acres of Section 3, Township 18, Range 13, and called it Reading, after Reading, Pennsylvania. In summer 1870, the town site was surveyed.

The first post office in Reading was established in August 1870. Reading was incorporated as a city in September 1890. 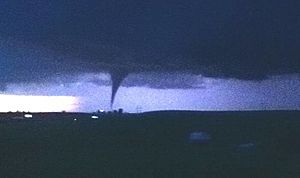 EF3 tornado that struck Reading in May 2011

On May 21, 2011 around 9:15PM, an EF3 tornado hit Reading. It was three blocks wide and stayed on the ground for about four miles. The tornado destroyed at least 56 of 110 homes and 14 of 21 businesses. The post office and fire station suffered major damage. One person died and two were hospitalized. Early damage estimates topped $2.2 million.

In just over a year, the community rebuilt itself with some help of the Federal Emergency Management Agency. The grain elevator destroyed in the tornado has been rebuilt, houses have been repaired, destroyed trees removed, and once again Reading has become a quiet place to live.

The climate in this area is characterized by hot, humid summers and generally mild to cool winters. According to the Köppen Climate Classification system, Reading has a humid subtropical climate, abbreviated "Cfa" on climate maps. 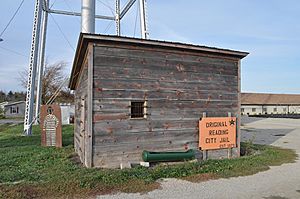 Reading is part of the Emporia Micropolitan Statistical Area.

There were 86 households of which 46.5% had children under the age of 18 living with them, 52.3% were married couples living together, 12.8% had a female householder with no husband present, 7.0% had a male householder with no wife present, and 27.9% were non-families. 24.4% of all households were made up of individuals and 8.2% had someone living alone who was 65 years of age or older. The average household size was 2.69 and the average family size was 3.15.

There were 92 households out of which 39.1% had children under the age of 18 living with them, 53.3% were married couples living together, 7.6% had a female householder with no husband present, and 31.5% were non-families. 26.1% of all households were made up of individuals and 9.8% had someone living alone who was 65 years of age or older. The average household size was 2.68 and the average family size was 3.29.

All content from Kiddle encyclopedia articles (including the article images and facts) can be freely used under Attribution-ShareAlike license, unless stated otherwise. Cite this article:
Reading, Kansas Facts for Kids. Kiddle Encyclopedia.