Redonda is an uninhabited Caribbean island which is legally part of Antigua and Barbuda, in the Leeward Islands, West Indies. The island is about 1.6 kilometres (1 mi) long, 0.5 kilometres (0.3 mi) wide, and is 296 metres (971 ft) high at its highest point.

Redonda is home to vast numbers of sea birds, and the island was an important source of guano before artificial fertilisers started to be mass-produced. Guano-mining operations started in the 1860s and ceased after the start of World War I. During these mining operations a few buildings and other installations were put in place on the island, and some physical remnants of that phase in its history are still visible.

The island was named by Columbus in 1493. "Redonda" is the female form of the Spanish language adjective meaning "round".

The island of Redonda became part of Antigua and Barbuda in 1967. 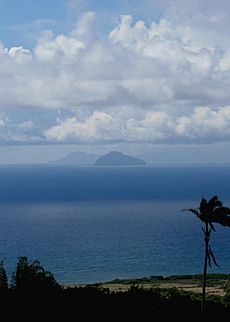 The island of Redonda as seen from Nevis with Montserrat faintly visible in the distance.

Christopher Columbus found Redonda in 1493 on his second journey. He said the island belonged to Spain. He named the island Santa María la Redonda, meaning Saint Mary the Round. The island looks round when viewed from the side. In the 1860s, the island became a British possession.

All content from Kiddle encyclopedia articles (including the article images and facts) can be freely used under Attribution-ShareAlike license, unless stated otherwise. Cite this article:
Redonda Facts for Kids. Kiddle Encyclopedia.