Rice, formerly named Blythe Junction, is a former town in the Rice Valley and the southern tip of the Mojave Desert, and within unincorporated San Bernardino County, southern California. Although it is still on many maps, the only things remaining there are the Rice Shoe Tree and an unmanned railroad siding. There are no resident inhabitants or remaining buildings.

The town, located on present-day California State Route 62 between Twentynine Palms and the Colorado River, grew around a Santa Fe Railroad subdivision and siding. The subdivision and siding are still in use, but have since changed hands and currently belong to the Arizona and California Railroad, a short line serving southeastern California from Rice to Cadiz, California and southwestern Arizona at Parker. It was the starting point of the abandoned Ripley Branch that goes through Blythe to Ripley, California.

To the east of Rice is the Rice Municipal Airport, which was acquired by the United States Army's 4th Air Support Command in 1942 as a sub-base of Thermal Army Airfield, and was operational by the end of the year. While the airfield's date of construction is unknown, it was not depicted on a 1932 Los Angeles Airways Chart, indicating construction sometime in the ten years between 1932 and 1942. Rice Army Airfield consisted of two intersecting paved 5,000 foot runways and numerous dispersal pads south of the runways. In 1944 the airfield was transferred from Thermal Army Airfield to March Field. Operations at Rice Field were ended by August 1944, and the field was declared surplus on 31 October 1944.

The desert training area near Rice Army Airfield was at one time considered as the site for the world's first atomic-bomb test ("Trinity"), and in fact was the second-choice site. Instead, a site near Alamogordo, New Mexico, was chosen.

Rice became noted for its Rice Shoe Tree, a lone tamarisk on a turnout just south of the highway. For reasons unknown, it became customary for travelers on Highway 62 (also known as Rice Road) to and from the Colorado River to hang an old shoe on the tree's branches. The tree was featured on California's Gold, a PBS program hosted by Huell Howser. The tree burned to the ground in 2003 in a fire of suspicious origin, after which a 'shoe garden' replaced it; a fence on which people hang shoes instead. Travelers still stop to spell their names on the nearby Arizona and California Railroad right-of-way with the multi-colored volcanic rock used as ballast. Hand-assembled graffiti lines the railroad for the entire distance that it parallels Highway 62. 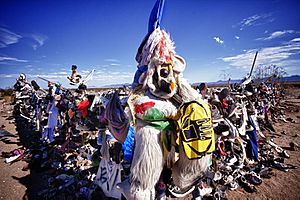 At some point during the period 1944–48, Rice Army Airfield was renamed Rice Airport and began operations as a public civilian airport, housing a small flight school for missionaries. Between 1952 and 1955, Rice Airport was changed to a private field, and by 1960 it had been abandoned. As of 2007, no standing structures remain and little evidence exists of the airport's former existence.

There are no standing buildings and no residents in Rice at present. A hand-painted sign on the western outskirts of the town once announced that the townsite was for sale, but that sign has since been removed. The only building which remains in any condition is a demolished service station.

In 2010, there was filming for the 2011 movie Fast Five near Rice. It was featured during the train scene in the beginning of the movie.

All content from Kiddle encyclopedia articles (including the article images and facts) can be freely used under Attribution-ShareAlike license, unless stated otherwise. Cite this article:
Rice, California Facts for Kids. Kiddle Encyclopedia.