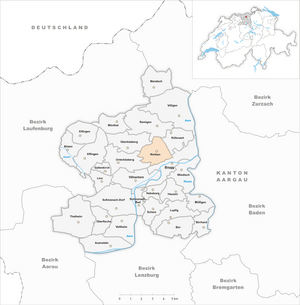 Riniken is a municipality in the district of Brugg in the canton of Aargau in Switzerland. 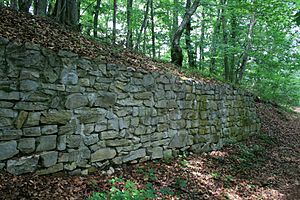 While Iberg Castle was built in the 11th Century and abandoned in 1200, the village of Riniken is first mentioned in 1253 as Rinikon. The rights to high justice were held by the Habsburgs until 1460, when the rights went to the bailiwick of Schenkenberg under the city of Bern. The low justice right was held, until 1406, by Königsfelden Abbey and after the Protestant Reformation those rights transferred to Bözberg.

Religiously, Riniken belonged to the Umiken parish. In 1967 the village received a private cemetery, and in 1978 an ecumenical ecclesiastical center.

Starting in 1712, there was a migration of villagers to Dättwil (now part of Baden), as agriculture offered very little money. There was never any industry in Riniken, but in 1960 about half of the workforce worked in the second sector. The recent population growth is mainly due to commuters who have moved into the municipality.

Of the built up area, housing and buildings made up 6.7% and transportation infrastructure made up 4.0%. 56.4% of the total land area is heavily forested. Of the agricultural land, 18.9% is used for growing crops and 10.7% is pastures.

The municipality is located in the Brugg district. It consists of the former linear village of Riniken and the hamlets of Neuriniken.

All content from Kiddle encyclopedia articles (including the article images and facts) can be freely used under Attribution-ShareAlike license, unless stated otherwise. Cite this article:
Riniken Facts for Kids. Kiddle Encyclopedia.