Kids Encyclopedia Facts
Not to be confused with Río San José. 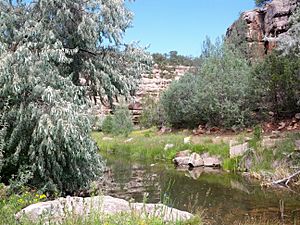 The Rio San Jose's farthest tributary stream is Bluewater Creek; its headwaters are in the Zuni Mountains, near the continental divide in Cibola County, with about 400 feet of the course in McKinley County. Bluewater Creek is dammed to form Bluewater Lake, with a capacity of 43,500 acre feet (53,700,000 m3). The Rio San Jose proper starts at the confluence of Bluewater Creek and Mitchell Draw near Bluewater Village. Entering Valencia County, it flows southeast, through Grants, then turning east near McCartys, flowing through the Acoma Indian Reservation and Laguna Pueblo. The remains of an ancient dam constructed by the Laguna people sometime between 1370–1750 AD is situated within Laguna Pueblo. Below Mesita the river turns southeast again, flowing through a narrow canyon before joining the Rio Puerco in Bernalillo County.

The entire course of the river below Bluewater Creek is roughly paralleled by the BNSF Railway tracks (formerly the Atlantic and Pacific Railroad, built around 1882, later absorbed into the AT&SF). Between Bluewater Village and Mesita the river valley provides the route for old U.S. Route 66 and I-40.

The water level and streamflow of the Rio San Jose has been measured at a number of sites in Cibola County, New Mexico. Stream gauges have been operated by the USGS near Laguna, Correo, and at Acoma Pueblo, near Grants.

The highest river level recorded occurred in September 1963 with a height of 4.87 feet (1.48 m) through the gauge, giving a corresponding flow of 1,400 cubic feet per second (40 m3/s), although this peak flow was affected by diversion or regulation.

All content from Kiddle encyclopedia articles (including the article images and facts) can be freely used under Attribution-ShareAlike license, unless stated otherwise. Cite this article:
Rio San Jose Facts for Kids. Kiddle Encyclopedia.