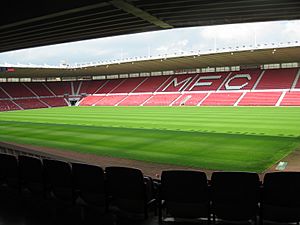 The Riverside Stadium is a football stadium in Middlesbrough, England. The stadium is the homeground of Middlesbrough F.C. since its opening. Its present capacity is 34,742 all seated. There is provisional permission to expand the stadium to 42,000 if it is needed.

During the construction of the new Wembley stadium the English nationalteam toured the country. The Riverside was chosen to host the Euro 2004 qualifying match against Slovakia on 11 June 2003. But also some U21 matches were held.

All content from Kiddle encyclopedia articles (including the article images and facts) can be freely used under Attribution-ShareAlike license, unless stated otherwise. Cite this article:
Riverside Stadium Facts for Kids. Kiddle Encyclopedia.