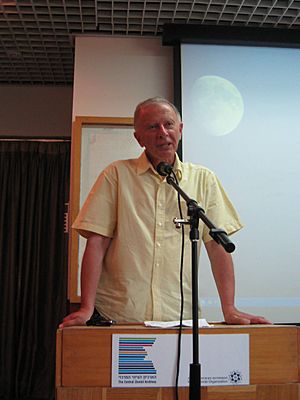 Robert Solomon Wistrich (April 7, 1945 – May 19, 2015) was a British-Israeli educator and author. He was a leading scholar of antisemitism in Europe. He was also the Neuburger Professor of European and Jewish history at the Hebrew University of Jerusalem. He wrote and edited at least 30 books.

Wistrich was born in Lenger, Kazakh SSR (now Kazakhstan). His parents were leftist Polish Jews who moved to escape antisemitism. He later moved to France with his family, and grew up in England.

All content from Kiddle encyclopedia articles (including the article images and facts) can be freely used under Attribution-ShareAlike license, unless stated otherwise. Cite this article:
Robert S. Wistrich Facts for Kids. Kiddle Encyclopedia.