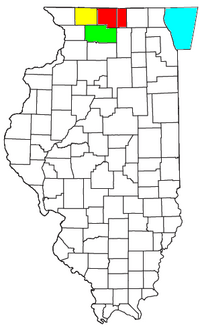 The Rockford Metropolitan Statistical Area, as defined by the United States Census Bureau, is an area consisting of four counties in north-central Illinois, anchored by the city of Rockford. As of the 2010 census, the MSA had a population of 349,431 (though a 2011 estimate placed the population at 348,360). The Rockford MSA is adjacent to the Janesville-Beloit MSA and the Chicago MSA. It forms the main part of the larger Rockford–Freeport–Rochelle Combined Statistical Area (est. pop. 455,595).

The Rockford–Freeport–Rochelle Combined Statistical Area is made up of four counties in north-central Illinois. The statistical area includes one metropolitan area and two micropolitan areas. As of the 2000 Census, the CSA had a population of 420,215 (though a July 1, 2009 estimate placed the population at 455,595).

All content from Kiddle encyclopedia articles (including the article images and facts) can be freely used under Attribution-ShareAlike license, unless stated otherwise. Cite this article:
Rockford metropolitan area, Illinois Facts for Kids. Kiddle Encyclopedia.