Ryegate is a town in Caledonia County, Vermont, United States. The population was 1,165 at the 2020 census. The town contains the villages of South Ryegate, East Ryegate, and Ryegate Corner. 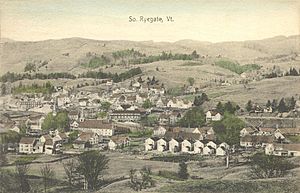 One of the New Hampshire Grants, it was chartered by Governor Benning Wentworth on September 8, 1763. Granted to Richard Jenness and 93 others, it was named Ryegate, a variant spelling of Reigate in Surrey, England. The first settlers were Aaron Hosmer and his family. Sold to John Witherspoon and others, the southern half of town was purchased in 1773 by two agents for the Scotch American Company of Farmers from Renfrew and Lanark, Scotland, whose members began settlement in 1774.

The town had excellent soil for the cultivation of grains, vegetables and orchards. Streams teemed with salmon and trout. Hills and valleys provided pasturage for grazing sheep and cattle. Connected in 1847 to the Connecticut & Passumpsic Rivers Railroad, the town by 1859 was noted for producing butter and leather. The Wells River supplied water power for one gristmill and five sawmills. In 1873, the Montpelier & Wells River Railroad was completed. In 1890, a big brickyard opened; then in 1906, the Ryegate Paper Company began operation. But the town's dominant industry was six granite quarries at Blue Mountain.

The town is crossed by Interstate 91, U.S. Route 5, and U.S. Route 302. It is bordered by the town of Newbury to the south, Groton to the west, and Barnet to the north. To the east, across the Connecticut River lies Bath, New Hampshire.

There were 435 households, out of which 31.3% had children under the age of 18 living with them, 61.8% were married couples living together, 7.4% had a female householder with no husband present, and 25.3% were non-families. 19.8% of all households were made up of individuals, and 7.8% had someone living alone who was 65 years of age or older. The average household size was 2.64 and the average family size was 3.05.

The Blue Mountain Union School (BMU) serves students from the town of Ryegate and consists of Pre-K through grade 12 housed in one building. Total enrollment for the 2017–2018 school year was 419 students. BMU is located on Route 302 (Exit 17 off Interstate-91), just east from P & H Truckstop.

The Blue Mountain Union School District was formed in November 1964 merging the Wells River Graded School District, the Groton Town School District, and the Ryegate Town School District. This merger resulted in the closing of five local schools: Groton School, Wells River School, South Ryegate School, Ryegate Corner School, and East Ryegate School. The merger also removed the option for high school choice in the town of Ryegate, in favor of attending the new union high school. Although the merger was approved in 1964, there was a lengthy legal battle regarding the formation of the district, and the new district did not operate a school building until 1970.

All content from Kiddle encyclopedia articles (including the article images and facts) can be freely used under Attribution-ShareAlike license, unless stated otherwise. Cite this article:
Ryegate, Vermont Facts for Kids. Kiddle Encyclopedia.