Groton is a town in Caledonia County, Vermont, United States. The population was 984 at the 2020 census. It contains the places Groton Pond, Rickers Mills, Rickers and West Groton. The unincorporated village of Groton in the southeast corner of town is recorded as the Groton census-designated place (CDP), with a population of 419 at the 2020 census.

Groton is located in the southwest corner of Caledonia County. It is bordered by the town of Peacham to the north, Barnet to the northeast, and Ryegate to the east, all in Caledonia County. To the south, in Orange County, are the towns of Newbury (southeast), Topsham (south), and Orange (southwest). The Washington County towns of Plainfield and Marshfield are to the west. According to the United States Census Bureau, the town has a total area of 142.4 square kilometres (55.0 sq mi), of which 139.2 square kilometres (53.7 sq mi) is land and 1.2 square miles (3.1 km2), or 2.19%, is water.

The Wells River, a tributary of the Connecticut River, has its headwaters in Groton. Groton State Forest occupies most of the western third of the town. The highest point in Groton is 3,352-foot (1,022 m) Signal Mountain, near the southwest corner of the town.

There were 338 households, out of which 35.8% had children under the age of 18 living with them, 61.8% were couples living together and joined in either marriage or civil union, 9.5% had a female householder with no husband present, and 25.4% were non-families. 20.1% of all households were made up of individuals, and 9.8% had someone living alone who was 65 years of age or older. The average household size was 2.59 and the average family size was 2.99.

The Groton Fall Festival and the Fall Foliage Chicken Pie are annual traditions. 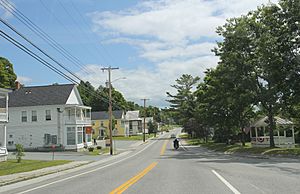 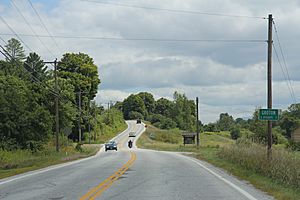 All content from Kiddle encyclopedia articles (including the article images and facts) can be freely used under Attribution-ShareAlike license, unless stated otherwise. Cite this article:
Groton, Vermont Facts for Kids. Kiddle Encyclopedia.