Sacabambaspis is an extinct genus of jawless fish that lived in the Ordovician period. Sacabambaspis lived in shallow waters on the continental margins of Gondwana. It is the best known arandaspid with many specimens. It is related to Arandaspis. 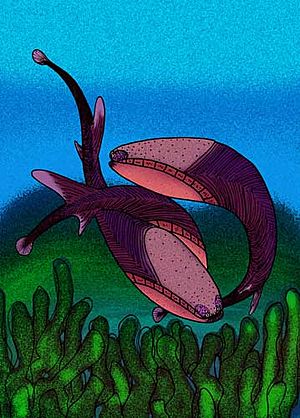 Sacabambaspis was approximately 25 centimetres (9.8 in) in length. The body shape of Sacabambaspis vaguely resembled that of a tadpole with an oversized head, flat body, wriggling tail, and lack of fins. It had characteristic, frontally positioned eyes, like car head lamps.

Sacabambaspis had a head shield made from a large upper (dorsal) plate that rose to a slight ridge in the midline, and a deep curved lower (ventral) plate, this headshield is ornamented with characteristic oak-leaf shaped or tear-drop shaped tubercles. Also it had narrow branchial plates which link these two along the sides, and cover the gill area. The eyes were far forward and between them are possibly two small nostrils and they, which are surrounded by what is thought to be endoskeletal bone, and putative nostrils, are found at the extreme anterior of the head, one of the diagnostic features of the arandaspids. The rest of the body was covered by long, strap-like scales behind the head shield.

The tail consists of relatively large dorsal and ventral webs and an elongated notochordal lobe, the posterior end of which is bordered by a small fin web. This tail structure clearly differs from that of heterostracans, which are currently grouped with arandaspids and astraspids in the clade Pteraspidomorphi (Gagnier 1993, 1995; Donoghue & Smith 2001; Sansom et al. 2005), in which the caudal fin looks diphycercal (i.e. symmetrical) and strengthened by a few large radials (Janvier 1996). 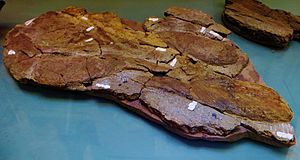 Genus named after the village of Sacabamba, Cochabamba Department, Bolivia, where the first examples were found.

Although it had no jaws, the mouth of Sacabambaspis janvieri was lined with nearly 60 rows of small bony oral plates which were probably movable in order to provide more efficient suction-action through expansion and contraction of the oral cavity and pharynx.

The fossils of Sacabambaspis show clear evidence of a sensory structure (lateral line system). This is a line of pores within each of which are open nerve endings that can detect slight movements in the water, produced for example by predators. The arrangement of these organs in regular lines allows the fish to detect the direction and distance from which a disturbance in the water is coming.

All content from Kiddle encyclopedia articles (including the article images and facts) can be freely used under Attribution-ShareAlike license, unless stated otherwise. Cite this article:
Sacabambaspis Facts for Kids. Kiddle Encyclopedia.