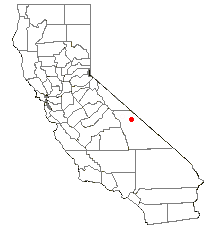 Saline Valley is a large, deep, and arid valley in the northern Mojave Desert of California. Most of it became a part of Death Valley National Park when the park expanded in 1994. This area had previously been administered by the BLM. It is located northwest of Death Valley proper, south of Eureka Valley, and east of the Owens Valley. The valley's lowest elevations are about 1,000 feet (300 m) and it lies in the rain shadow of the 14,000-foot (4,300 m) Sierra Nevada Range, plus the 11,000-foot (3,400 m) Inyo Mountains bordering the valley on the west. 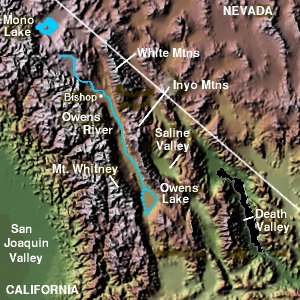 A large dry lake occupies the center of the valley. The west end of the lake supports a salt marsh, which contains a variety of plant and animal life. The marsh is fed by a perennial stream from Hunter Canyon. North of the lake is a large area of low sand dunes.

There are a number of hot springs in the northeast corner of the valley. The water temperature at the source of these springs averages at 107 °F (42 °C).

Saline Valley Road is a sporadically maintained dirt road running north-south through the length of the valley, and is the most commonly used access route. From SR 168 in the north to SR 190 in the south, it is 95 miles (153 km) long, and ranges in elevation from 1094 to 7593 feet (333 to 2314 m). It goes through two mountain passes: the Inyo Mountains in the north, and the Nelson Range in the south. The northern pass is higher, but is better maintained and is about 20 miles (30 km) closer to the hot springs. One or both passes may be closed during the winter due to snow, ice, or washouts. The "Road Closed" signs are often left in place year-round in an attempt to deter motorists who may not realize how treacherous the road is, and to limit Inyo County liability. It is not a Park Service Road, and Inyo County is responsible for its maintenance. Officially, the entire length of the road is passable by non-4WD vehicles, but long stretches of road are extremely rough and surfaced by sharp-edged primitive rock gravel. High ground clearance and mounted full-size spare tires are strongly recommended. 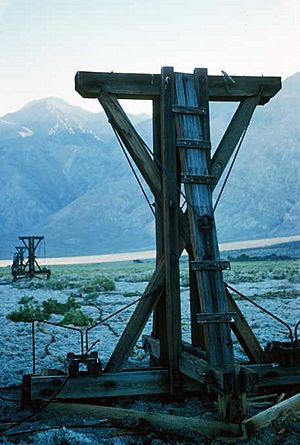 Salt tram in Saline Valley looking towards White Mountains in 1952 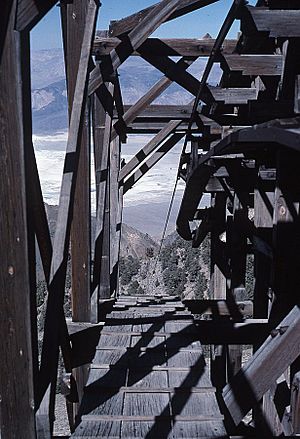 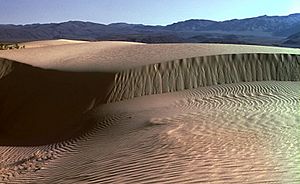 "The Dunes" of Saline Valley, California 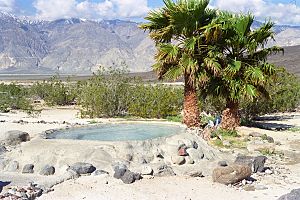 Saline Valley was a significant mineral source in the late 19th and early 20th centuries. The Conn and Trudo Borax Company mined borax from the salt marsh from 1874 to 1895. The remains of this site can be seen today as a few shallow pits near Saline Valley Road. Salt mining began in 1903 at the south end of the lake, and continued into the 1930s.

An electric aerial tram was constructed in 1911 to carry the salt 14 miles (22 km) over the Inyo Mountains to a terminus northeast of Keeler, California in the Owens Valley. It operated sporadically from 1913 to 1936, but ultimately proved to be too expensive to run. The tram, which was placed on the National Register of Historic Places in 1973, was the steepest ever constructed in the United States. It rose from an elevation of 1100 feet (340 m) in Saline Valley to 8500 feet (2600 m) over the mountains, and then down to 3600 feet (1100 m). Route was south from Salt Lake to Daisy Canyon then southwest and terminated at the Southern Pacific RR between Dolomite and Swansea. In recent years it has been badly damaged by vandals.

There are 3 sections of springs, the upper, middle and lower springs. The middle and lower springs have been developed with concrete soaking tubs and showers are present. The upper spring is in an undeveloped natural state. In late 2005, seismic activity disturbed the flow of water to the lower springs. The only functional section remaining after that was the middle springs. However, the flow appears to be returning to the lower springs. As of early 2007, flow is estimated to be about 50% of what it was before the earthquake, and is increasing, making both springs functional.

In 2011, G. Gotham Smith's feature film 3.14... was shot in Saline Valley at both the warm springs and Willow Creek Camp.

Saline Valley, looking west from a point near the Racetrack Playa in Death Valley National Park 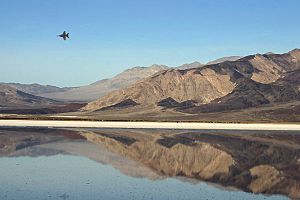 Jets darting in high speeds are prevalent above the valley

Low-flying jet aircraft have long been common in the valley. The airspace over the valley is part of the US military's vast R-2508 Special Use Airspace complex.[1] The Saline Military Operating Area (MOA) covers the entire valley south to Hunter Mountain from 200' AGL up to FL180 with an ATCAA located over the same area extending from FL180 up to FL600. The airspace is used by military aircraft primarily from Nellis AFB, Edwards AFB, NAWS China Lake, and NAS Lemoore for high and low altitude mission training. Military aircraft utilize radio communications on either 256.8 MHz or 123.95 MHz while operating in the Saline MOA; however, military aircraft throughout the R-2508 complex often use 315.9 MHz when conducting low altitude operations below 1500' AGL.

In December 2003, Edwards Air Force Base completed an environmental assessment for proposed construction and operation of a radar system and microwave repeater facility in the valley. The assessment's conclusion is that "A Finding of No Significant Impact (FONSI) for the alternatives considered has been determined. No potentially significant issues have been identified at any of the five alternative beacon radar sites or any of the three repeater sites considered for the proposed project. A careful review of the environmental issues that have been brought forward to date has not identified any potentially significant issues. Therefore, an Environmental Impact Statement will not be prepared."

All content from Kiddle encyclopedia articles (including the article images and facts) can be freely used under Attribution-ShareAlike license, unless stated otherwise. Cite this article:
Saline Valley, California Facts for Kids. Kiddle Encyclopedia.