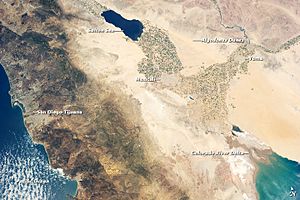 The Salton Trough region from orbit.

The Salton Trough is an active tectonic pull-apart basin, or graben. It lies within the Imperial, Riverside, and San Diego counties of southeastern California, United States and extends south of the Mexico–United States border into the state of Baja California, Mexico. The northwestern end of the trough starts at the San Gorgonio Pass in Riverside County, and extends 115 miles (185 km) southeast to the Gulf of California. Major geographical features located in the trough include the Coachella Valley, the Salton Sea, and the Imperial Valley, in the United States, and the western side of the Mexicali Valley, and the Colorado River Delta in Mexico.

The Salton Trough is also referred to as a sedimentary basin because the basin has filled with sedimentary deposits as quickly as the basin has been sinking. In some areas, the sediment is more than 20,000 ft (6,100 m) deep. Sources of the sediment are the mountainous areas that surround the trough, and the Colorado River, which in the past fed Lake Cahuilla, a large inland freshwater lake, that disappeared after the Colorado River changed course to the Gulf of California.

Facts about the Salton Trough

All content from Kiddle encyclopedia articles (including the article images and facts) can be freely used under Attribution-ShareAlike license, unless stated otherwise. Cite this article:
Salton Trough Facts for Kids. Kiddle Encyclopedia.