The Salton Buttes are a group of volcanoes in California, on the Salton Sea. They consist of a 7-kilometer (4.3 mi)-long row of five lava domes, named Mullet Island, North Red Hill, Obsidian Butte, Rock Hill and South Red Hill. They are closely associated with a fumarolic field and a geothermal field, and there is evidence of buried volcanoes underground. In pre-modern times Obsidian Butte was an important regional source of obsidian.

The Salton Buttes lie within the Salton Trough, a tectonic depression formed by the San Andreas Fault and the San Jacinto Faults. The depression forms the northward extension of the Gulf of California, and is separated from it by the Colorado River Delta. A number of geothermal and volcanic features are located in the area, which is a region of active seafloor spreading.

While the Salton Buttes were formerly considered to be of the late Pleistocene epoch (which ended with the end of the last glacial maximum), newer dating efforts have determined that all of them formed more recently, during the current Holocene epoch, mostly through effusive eruptions. Future eruptions are possible and could endanger the surroundings.

The Salton Buttes are lava domes. They formed from viscous lava rising in a volcanic vent 250 m (820 ft) wide Obsidian Butte is surrounded by a lava flow, and Mullet Island has a characteristic "onion-skin" foliation. On Red Hill, there is a quarry, a marina, and a trailer park, and Obsidian Butte has been extensively quarried, to the point that it has lost most of its original appearance. There are hot springs and mofettes on Mullet Island.

A fumarole field is associated with the Salton Buttes. The field is characterized by gryphons and salses. These exhale carbon dioxide and steam, as well as ammonia and hydrogen sulfide. Some of these fumarolic vents reach heights of 2 m (6.6 ft), and resemble the lava-erupting vents. Mud pots are also found. Parts of the field have recently emerged from the Salton Sea, due to dropping water levels, which have also caused the fumarolic vents to develop and grow noticeably, including an increased number of gryphons.

There is a geothermal field associated with the Salton Buttes. It is one of the largest and warmest on Earth, with temperatures of 360 °C (680 °F) at 1.5–2.5 km (0.93–1.55 mi) depth. Various volcanic rocks have been found in drill cores at the Salton Buttes. Rocks found include andesite, basalt, dacite, diabase, gabbro and rhyolite. Some of these volcanic rocks bear traces of hydrothermal alteration. In some places the layers of volcanic rocks are as thick as 100 m (330 ft). There may be other volcanoes buried in the sediment pile; at least four separate aeromagnetic anomalies have been found at the Salton Buttes, and these may be signs of buried volcanoes. The field has been prospected for geothermal power generation, and presently ten geothermal power plants produce 327 megawatt of power.

Since the Pliocene, the Salton Trough and the Gulf of California have formed an active rift zone south of the San Andreas Fault. In a rift zone, seafloor spreading is underway, accompanied by volcanic and geothermal activity, active faulting and rapid sedimentation.

Since five million years ago, the buildup of sediments in the Colorado River Delta separated the Salton Trough area from the actual Gulf of California, forming a large depression that currently reaches a depth of 40 m (130 ft) below sea level. This depression is a pull-apart basin. It has formed between various branches of the San Andreas Fault and the San Jacinto Fault (which are connected by the Brawley Seismic Zone) The Salton Trough is still actively subsiding at rates of 3 mm/a (0.12 in/year), increasing to 4–8 mm/a (0.16–0.31 in/year) in the central area of the Trough.

A number of Quaternary volcanic centres have formed in the region, including Cerro Prieto, Consag Rock, Isla San Luis, Isla Tortuga, the Salton Buttes and Sierra Pinacate which is the largest of these volcanoes. Strong geothermal activity has been observed as well, with the Salton Trough alone hosting five geothermal fields (Brawley-Mesquite, Cerro Prieto, East Mesa, Heber and Salton Sea). These five fields have total heat output of 1,000–10,000 MW (1,300,000–13,400,000 hp). Part of this heat output is used to generate geothermal power, with annual production of 1–3 TWh/a (110–340 MW). 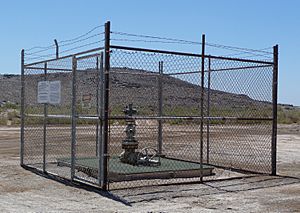 A geothermal well at Obsidian Butte

The Salton Buttes volcanoes were formed on Quaternary sediments of the Colorado River Delta. Below them, the basement is rock formed from sediments deposited in lakes and by rivers, such as mudstones, sandstones and siltstones. Below this 5 km (3.1 mi) thick upper layer, there are metamorphic greenschist rocks formed by hydrothermal alteration and thermal metamorphism of sediments, and finally, below that, gabbroic rocks, at 18–10 km (11.2–6.2 mi) depth. Diabase and intruded rhyolites have also been identified in the sediments.

All of the Salton Buttes, except for Mullet Island, have developed on a lineament, a linear feature with a conspicuous magnetic anomaly. The volcanoes seem to share a common feeder dyke. This dyke may be connected to deep-seated extensional processes along a transform fault that links the San Andreas Fault to the Gulf of California. The source of heat for the volcanoes and geothermal field is unclear: both deep mafic and shallow felsic sources have been proposed. Seismic tomography of the area below the Salton Buttes has identified areas in the mantle with an anomalously low seismic velocities, which would be consistent with higher temperatures there. 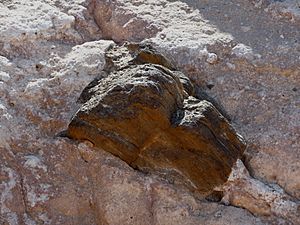 A xenolith on Red Island

The domes are formed by rhyolite, which has an alkaline and calcium-poor composition and defines a potassium-rich suite (see QAPF diagram). Scarce phenocrysts include amphibole, anorthoclase, apatite, clinopyroxene, ilmenite, magnetite, orthopyroxene, quartz and zircon. The isotopic composition of these volcanic rocks differs from that of the Salton Trough sediments. The total volume of the domes is about 0.5 km3 (0.12 cu mi).

The way in which the magmas are formed is controversial. Explanations have called on several different processes, including assimilation of hydrothermally altered rocks, fractional crystallization and partial melting. One model presumes the existence of a continuously active deep magmatic reservoir, which generates precursor magmas and episodically delivers them to a shallower magmatic reservoir, where the rhyolites are formed.

Xenoliths found in the volcanic rocks include granite, granophyre, metasediments and tholeiite, often heavily altered by interactions with the volcanic system. Some of these basalts resemble those from active rift zones in the Gulf of California and the East Pacific Rise. The northernmost segment of the East Pacific Rise appears to be identical to the Brawley Seismic Zone.

Most of the Buttes formed between 1,800 and 2,300 years ago, although Mullet Island may be 5,000 years older. According to the Global Volcanism Program, Mullet Island formed 290 BCE ± 100 years, Obsidian Butte 10 CE ± 100 years and the other Buttes 210 CE ± 100 years. If Mullet Island formed at the same time as the other Buttes, the eruption episode that formed the Salton Buttes lasted probably no more than 500 years. Presently, fumarolic activity occurs at the Buttes from cracks in the volcanic rocks of the Salton Buttes and seismic activity has been recorded from the geothermal field. 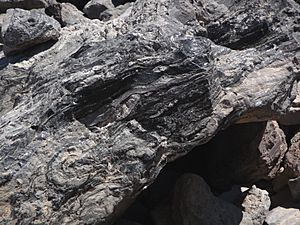 After their emplacement, the Salton Buttes were at times submerged in Lake Cahuilla, causing the formation of wave cut terraces and rendering the obsidian of Obsidian Butte inaccessible. However, only South Red Hill appears to have erupted underwater. Pumice rafts formed on the lake and are now preserved on its former shorelines. Wind-borne and lacustrine sediments were also emplaced on the domes. 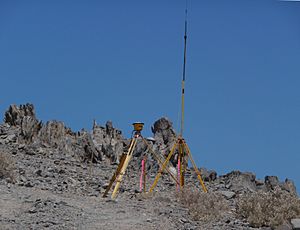 The discovery of Holocene eruptions of the Salton Buttes have drawn attention to the volcanic hazards posed by the field. The Salton Buttes are monitored by the California Volcano Observatory for possible future volcanic activity. Geophysical evidence shows that liquid magma is still present underneath the Salton Buttes. Since the volcanoes have erupted in the past, there is present-day unrest, and there are areas of high population density nearby (about 2,518 people lived in the area in 2010), the Salton Buttes are considered high-hazard volcanoes. Future eruptions may generate pyroclastic flows and pyroclastic surges, which could endanger people within ten kilometers (6.2 mi) of the vents. The field is monitored with seismometers and periodic sampling of gas exhalations and hot springs; there is a volcano hazard map, but it is incomplete.

All content from Kiddle encyclopedia articles (including the article images and facts) can be freely used under Attribution-ShareAlike license, unless stated otherwise. Cite this article:
Salton Buttes Facts for Kids. Kiddle Encyclopedia.