Kids Encyclopedia Facts
Not to be confused with San Mateo Creek (Southern California).

San Mateo Creek (Spanish for: St. Matthew Creek) is a perennial stream whose watershed includes Crystal Springs Reservoir, for which it is the only natural outlet after passing Crystal Springs Dam. 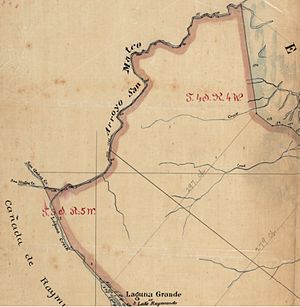 After discovering San Francisco Bay from Sweeney Ridge on November 4, 1769, the Portolà expedition descended what Portolà called the Cañada de San Francisco, now San Andreas Creek (or possibly San Mateo Creek). "Laguna Grande" is where the party camped (now covered by the Upper Crystal Springs Reservoir). The Laguna Grande place name is also shown on the 1840s diseño del Rancho Cañada de Raymundo and an 1856 plat. The campsite is marked by California Historical Marker No. 94 "Portola Expedition Camp". They camped here a second time on November 12, on their return trip.

Padre Palóu, on an expedition from Mission San Carlos Borromeo (Carmel) to explore the western side of San Francisco Bay led by Captain Fernando Rivera, renamed Portola's Cañada de San Francisco to Cañada de San Andrés on November 30, 1774, it being the feast day of St. Andrew. Palou's name was later applied to the San Andreas fault (misspelled) when the fault was discovered to be the creator of the valley.

In 1776, the expedition led by Captain Juan Bautista de Anza, rather than stay on the coast as Portola had done, followed an inland route from Monterey, California established by Pedro Fages in 1770. De Anza descended the Santa Clara Valley to San Francisco Bay and followed its western shoreline up the peninsula to San Francisco. The de Anza party selected the sites for Mission San Francisco de Asís (Mission Dolores) and the Presidio of San Francisco. De Anza picked up Portola's trail at San Francisquito Creek, following the Cañada de San Andrés north from there. On the return to Monterey, the party camped on the banks of San Mateo Creek on March 29, 1776. 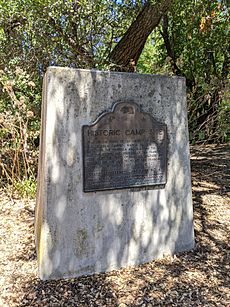 In de Anza's diary on March 29, 1776, he wrote: "Night having fallen, at a quarter past six I went down to the arroyo of San Andreas and to another, that of San Matheo, where it descends to empty into the estuary. There I found in our camp nearly all the men of the village, very friendly, content, and joyful, putting themselves out to serve us in every way, a circumstance which I have noted in all the natives seen from the 26th up to now, but one which I had not experienced theretofore since leaving the people of the Colorado River." 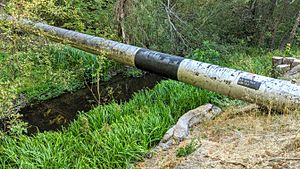 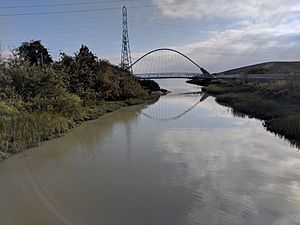 The Ryder Park pedestrian bridge is the last crossing of San Mateo Creek before it flows into the Bay.

Fog drip may play a key role in the precipitation in the upper watershed. On Cahill Ridge, just west of San Mateo Creek and east of Pilarcitos Creek, at an altitude of 1,000 feet, Oberlander measured fog drip beneath tanoak (Lithocarpus densiflorus), coast redwood and three Douglas fir trees, the latter 125 feet tall. He found that the trees most exposed produced the most precipitation and in five weeks of measurement (July 20-August 28, 1951) fog drip below the tanoak produced 59 inches of precipitation, more than the total annual precipitation on nearby grasslands and chaparral. The Douglas fir produced 7-17 inches of fog drip and appeared to provide unique conditions supporting the orchids giant helleborine (Epipactis gigantea) and phantom orchid (Cephalanthera austiniae), since these plants were found exclusively in these moist ridge tops.

The upper reach of the lower watershed of San Mateo Creek below Crystal Springs Dam consists of open space and sparsely developed residential areas of the cities of Hillsborough and San Mateo, California. This upper reach consists of closed canopy California oak woodland and serpentine grassland. The creek roughly parallels Crystal Springs Road through this section. Due to the unusual microclimate and presence of abundant serpentine there are an unusual number of rare plants in the upper catchment basin.

The middle reach consists of increasingly dense single family and multifamily residential land use along with some adjacent school, park and commercial uses. In the lower phase of the middle reach, San Mateo Creek is fully culverted through downtown San Mateo. In the lowest reach San Mateo Creek becomes tidal and discharges to San Francisco Bay between Ryder Park and Seal Point Park.

The creek mouth area contains slough and wetland habitats including mudflats that are known habitat of the endangered California clapper rail. San Mateo Creek was federally designated in 2002 as a section 303 impaired watershed for the substance diazinon; however, diazinon has been banned for golf course use by the U.S. Government. There is one golf course that provides surface runoff to San Mateo Creek in the city of San Mateo, and Crystal Springs Golf Course that drains to the Crystal Springs Reservoir.