Sappho is an unincorporated community in Clallam County, Washington, United States. The town is located at the intersection of U.S. Route 101 and Washington Route 113, in a largely forested area, and features parks and recreational facilities.

Sappho is a former logging area. The town was founded by Martin Van Buren Lamoreux, who left St. John, Kansas in 1889 with 8 of his 10 children, his second wife and her 3 children from a prior marriage. Arriving in Seattle, some of the party settled on Lake Union, but Lamoreux, thinking that land worthless, set out for the Olympic Peninsula. Traveling by steamer from Seattle, they landed at an Indian settlement called Pysht on the Strait of Juan de Fuca and hiked inland 20 miles through the rainforest to their claim. The town was named for the Greek poet Sappho, whom Lamoreux admired. The town was organized so all family members had a duty. Lamoreux was the postmaster and was called "Judge" because he had read law in his youth, and was appointed Justice of the Peace for that district.

Lamoreux's homestead in 1895 was originally called Sapho and was located .6 miles up Main Street from highway 101 which is now highway 113. The original town burned down leaving only the school house intact. 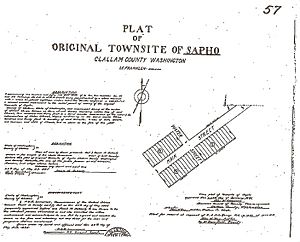 All content from Kiddle encyclopedia articles (including the article images and facts) can be freely used under Attribution-ShareAlike license, unless stated otherwise. Cite this article:
Sappho, Washington Facts for Kids. Kiddle Encyclopedia.