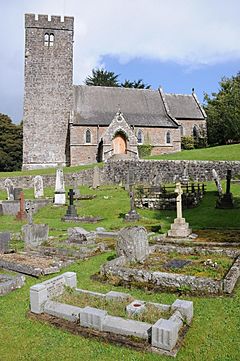 Saundersfoot was known in medieval Wales as Llanussyllt, and after the Norman conquest as St Issels (sometimes Issells), both after the parish church dedicated to the Welsh saint Issel. It appeared as Sct. Tissels on a 1578 parish map of Pembrokeshire. Its bishop or abbot was considered one of the seven principal clerics of Dyfed under medieval Welsh law. It was a substantial parish in 1833 with 1,226 inhabitants. John Marius Wilson described the village and parish as St Issells in his 1870–72 Imperial Gazetteer of England and Wales. The church lies in a dell to the north of Saundersfoot and is a grade II* listed building.

Permission to build the harbour was granted by Parliament in 1829 to the Saundersfoot Railway and Harbour Company for the export of anthracite coal from the many mines in the area, although coal was exported from the beach for centuries before this. The village grew up to serve the port which by 1837 had five jetties handling coal and iron ore and subsequently pig iron and firebricks from local sources. The course of the tramway from Bonville's Court mine bisects the village and ends at the jetty. The tramway from Stepaside forms the sea front. The industry finally faded away in the early years of the twentieth century, so that today, the harbour accommodates private moorings, pleasure boats for seasonal tourism, and small fishing charters.

At the local level, councillors are elected to Saundersfoot Community Council to oversee local issues, such as planning applications and maintenance of the local public buildings and cemetery.

Saundersfoot railway station is a mile from the village centre off the B4316 road. Trains call every two hours, westwards to Pembroke Dock and eastwards to Whitland, Carmarthen and Swansea.

Saundersfoot holds its New Year's Day swim every year which is sponsored by local businesses. More than 1,500 people took part in 2016. Due to COVID-19, the 2021 event was cancelled.

All content from Kiddle encyclopedia articles (including the article images and facts) can be freely used under Attribution-ShareAlike license, unless stated otherwise. Cite this article:
Saundersfoot Facts for Kids. Kiddle Encyclopedia.